Monday Tuesday
(May 19) – Well it sure did feel like a Monday, especially after all the things
that were going on. Now the title doesn’t sound like one of those happy ones
and you would be right. Sometimes you just can’t win the fight, but that
doesn’t mean that you don’t try. One of the greatest things @CrossFitCanuck
(and @CrossFit in general) have taught me is that no matter what, you have to
fight and keep fighting.  Sometimes you can get through the obstacle
that stands in your way, a tough WOD, a Half Marathon or Life in general and
sometimes you can’t.
Sadly over the weekend the CrossFit
community lost a fighter in the purest sense of the word. Jen Young was
diagnosed with cervical cancer and rather then pulling the bed sheets up over
her head and calling it a day, she fought with everything she had in her.
Instead of sitting on the sidelines, she started the Love the Snatch Foundation
for Cervical Cancer Research. She was a regular at Canada East events selling
T-Shirts in support of the cause. I never had the pleasure of meeting her, but
her story is one that should make you stop and reconsider the next time you
think about giving up.

“CrossFit, and especially
competing in CrossFit, has trained me to accept what I can’t control. I don’t
pick the daily WOD, I don’t influence who else shows up to compete, and I
certainly can’t do much about their performance and eventual score. Fretting
about what others are doing (or what has happened to other people with cancer)
won’t help me to do better. Whining about a workout won’t change it, and no
amount of moping is going to make my cancer disappear.” – Jen Young 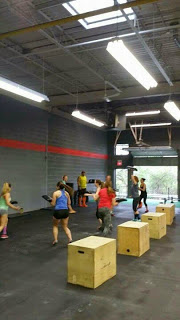