Skip to content
All You Can B: Bikes, Barbells and Bacon > About Me

Canada Day 2007
Who am I? Well look at the picture, that’s me. I’m like a
lot of people, outgoing, smart and struggling with controlling my eating and my
weight.
“You’re just a big guy”
“You are just big boned”
These are phrases that I’ve heard throughout my life. Do
they define who I am? Not really.  I like
to eat. Don’t get me wrong, I’m not a goldfish, I won’t eat until I explode. I
do however have the gift to be able to eat exactly the wrong types of food in
quantities that make them extremely unhealthy. I could polish off a medium
deluxe pizza without breaking a sweat and that bag of Doritos isn’t even a
challenge. Combine this love of food with a lifestyle where a TV or computers
were my biggest joys and you have a runaway weight freight train.
Now I played sports in grade school (Volleyball and
Basketball) so don’t think I just sat around. The trouble was the extra weight I
was carrying took a toll on my knees. It wasn’t always fun to play and outside
of school in front of the TV is where I spent my time. When I got to high
school I was told ‘I WAS playing football’ by one of the few people bigger than
I was. Wanting to fit in, I tried out and found that I did enjoy the game (not
so much the running). Here I was prized for my size. Had I found my place? Sort
of. I leaned out, but was still over 300lbs by the time I was in grade 12. I
learned to be good at the game (and proud), but the game took its’ toll on my
body and by the time I graduated I knew I had to give it up. Recruited by
almost every school in Canada, I wanted to be able to walk when I was 50 and
play with my kids so I had to walk away.
During my University years my weigh continued to go only in
one direction, up. In the late 90’s healthy options were not high on anyone’s priority
list. Sadly Ryerson was no different and with my meal plan it was a steady
stream of mini muffins, chicken fingers and ice cream. It was so bad that after
coming back from winter break and having my first meal, I could feel the oil
leaking from my pores. Add several years of working in the local bars with late
meals and lots of booze, not even learning to play Squash or the occasional
basketball shoot around helped.
By the time I made it to full time employment I was just
short of 400lbs (396lbs if the shipping scale is to be believed). That was my
breaking point. I swore that I would never see 400lbs, ever. What do I do? Do I
go to the gym? How do I change my diet? Where do I start? How can I keep from
getting discouraged and stick with it? All these questions and about a million
more were rattling around in my head. There had been many ‘false’ starts.
Personal trainers, nutrition plans, all had given me small measures of success,
but not enough to get past the final barrier.
So began the transformation…
I say transformation, because when it comes down to it, what
has to happen is a lifestyle change and you will not succeed until you are
ready and willing to do that. How many years did it take to figure that out?
Short answer, Lots. Up five mornings a week and at the gym for 2 hours before
work. Healthy lunches, no junk food, no ordering out. Discovering new sports
(cycling, running and Duathlons) thanks to some very, very supportive friends
and family and then finally discovering CrossFit. I say finally only because it
is the last discovery to date, who knows what discoveries still await. The gym
was great for what it was and I did lose weight, but there came a point where
you just can’t get any more traction on your own. I tried more personal
trainers and still nothing. At this point I was down to about 335lbs (+/- 35%
BF based on a Tanita scale).
When I started at CrossFit Canuck in November 2012, I had no
idea what I was in for. I barely had a grasp of what CrossFit even was. The
Head Coach took me under her wing and did everything imaginable to help me. She
pushed, she challenged and she forced me to face fears. There were still things
I was doing in life (my eating was better, but still not what it could be) that
were holding me back and she helped me see that. It was hard, maybe the hardest
thing I’ve ever done.  The key to success
though is to make it habit. Be mindless. I was once asked why I always showed
up on the same days at the same time. My answer, if you make it habit, then you
don’t have to think about it. This is where you need to be regardless of
anything else. 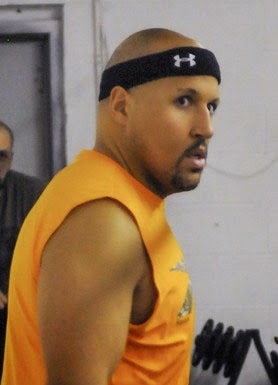 March 9, 2014
By March 2014 I was down another 65lbs and 25% body fat and
without a doubt the strongest I’ve ever been. Still nagging little things
threatened to derail me. Life got really busy really quickly, but I decided
that CrossFit was something I was very passionate about. People often joke that
CrossFitters never stop talking about CrossFit. Well, I am guilty as charged. I
think the reason behind that is, once you find something that is so amazing,
you want to share it with everyone you meet. I was so moved in fact I decided
to take the CrossFit Level 1 Certification and begin pursuing a career as a
CrossFit Coach. I had a long uphill battle. I still battle mobility issues
every day and I really have to focus on form to make sure that everything I present
to my classes is picture perfect.
Today, I’m still under 300lbs, but only just. Life has been
hectic and when combined with an infrequent training schedule my weight has
slowly crept upwards. I’m in much better shape than when I started, but deep
down I’m not happy. I don’t know where I want to end up, but where I am isn’t it.
It is hard to find that happy medium. Fit, healthy (both mentally and
physically), but still able to enjoy all that life has to offer. Being able to
go out and have an ice cream without feeling guilty or counting each and every
calorie. I haven’t found that happy place, but I will keep working towards it.
For those that come on this journey with me, thank you. When
this blog started it was a way to remain accountable. Taking these first steps
are always easier if you have support. It has evolved many times, as a workout
journal, as a communication method for friends and family and unto who knows
what in the future. I write from the heart. This is what I feel and what I think.
I will always try and be honest with what I share, but always be patient; I’m
not really into sharing feelings. I’m a work in progress, in all phases of
life.

Thanks for being a part of this…
Bernie