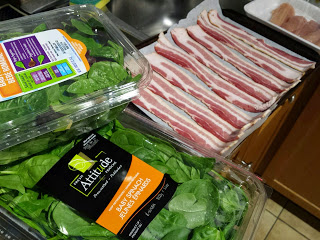 Some of Today’s Stars
Thursday (May 21) – There’s lots of things that you can put
in a jar, cookies being at the top of most people’s list (including mine,
especially chocolate chip). Salad may not spring to mind, but the mason jar
salad craze is a quick and easy way to tote everything around. Welcome to my
first ‘nutrition’ post since the blog redesign. Normally when I’m cooking
(which I do enjoy), I just put my head down and get to it, so you will have to
forgive me if my first set of photos don’t have that ‘artistic’ flair. I was
just excited that I remembered to take some while everything was going on. Now
before you wonder about the number of salads in production, I will say that
when I cook (even non-salad dishes) I always make enough for several more
meals. Batch cooking makes trying to make smart food decisions a little bit
easier.
Ladies and Gentlemen, the Bacon portion of Bikes, Barbells
and Bacon… 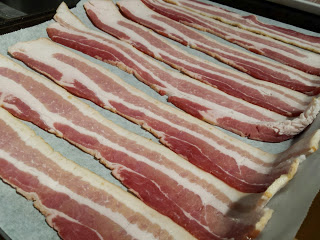 mmm… baaaccccoooonnnnn
Recipe (no exact measurements, it’s a salad, you won’t mess
it up)
Chicken Breast Fillets
6 Strips of Bacon (yes, there are 8 in the photo, but I had to make sure they
were good)
1 Large Container of Baby Spinach
1 Small Container of Baby Romaine
1 Large Pepper (Green here, but the rainbow awaits)
1/3 of a Sweet (or Spanish) Onion
1 Can of Corn
1 Small Bag of Shredded Carrots
1 Portion of Shredded Cheese (for each salad)
Cayenne Pepper
Wild Whiskey Smoked BBQ Seasoning 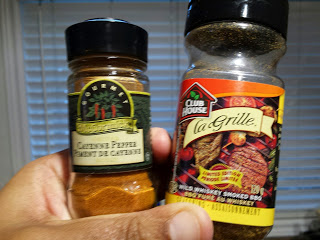 The Spice is Right
Now the instructions for this recipe are not written in
stone, feel free to experiment. First up get your prep work done. Heat the
corn. Rinse and chop the peppers into ‘good size’ pieces. What is ‘good size’?
Use your judgement, it’s a salad and you should be able to spear the veggies
when you dive in with a fork. For the onion, you are shooting for pieces that
are smaller than the peppers (unless you don’t mind slurping long strands). Put
each of the veggies into its own bowl (including the carrots which are already
ready to go), it will make assembly easier later on.
Line a baking dish with parchment paper and lay out your
BACON. I normally do this method because the bacon stays flat and you can throw
it in the oven and forget it. Speaking of the oven, I normally do 375-400
degrees and cook for about 20 minutes. Sprinkle the bacon with Cayenne Pepper
to give it a little bit of a kick. You also have the option of ‘candying’ the
bacon as well (drizzling it with honey), but cleanup becomes a little more
involved. Throw it in, but don’t forget to check in every now and then to see
how things are going. When it’s done, drain the fat (which can be used for
cooking later, just put it in a jar and store in the fridge) and pat the bacon
dry with paper towels. 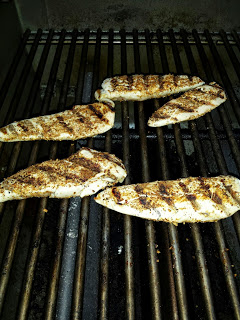 Grilled Meat
The chicken you can do any way you desire. I went with the
Whiskey seasoning sprinkled right on the fillets (you can use full breasts,
strips, thighs or any other meat) and then tossed them on the BBQ. Let’s be
honest, is there anything better than BBQ ___? The answer is no. Keep an eye out
here too. You don’t want to leave the chicken on too long and end up drying it
out (or worse, burning it). When it’s done, let it stand to cool… Chop the
chicken (when cooled) into bite sized pieces (think the same size as the
peppers) and throw them (gently) into a bowl. 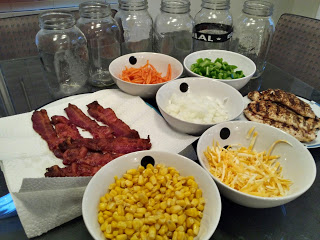 Check and Check
Everything chopped? Check. Everything cooked? Check. Cheese
shredded? Crap. Ok, you should do that now and place it into a bowl.
Anatomy of a Salad…
The Layers from the Bottom (there is no wrong way to do this,
I think)
1. Veggies that can handle the pressure (onions, peppers, carrots and the like)
2. Softer Veg (corn)
3. The MEAT Layer (here’s where you add the protein)
4. The Leafy Layer (in this recipe, romaine first and spinach on top)
5. The Garnish Layer (cheese and things like croutons (gasp) or nuts)
Now it’s time to build. Just work your way through the bowls
(following the guide above) until you have completed the salad and sprinkled
the cheese on top. Some folks like to add dressing into Layer 1 because it will
take some of the sting out of the onions. Me, I like to add it just before I’m
ready to eat because the salad will keep longer without it. When you are
packing it up, just make sure you are really jamming the leafy stuff into the
jar. It may not look like it, but LOTS will fit. For the salad pictured here,
it’s about 2 handfuls of romaine and 3-5 handfuls of spinach.

The Completed Product
Seal them up and refrigerate. Grab a jar and some dressing
(@savannahjessie went with a Fig Balsamic and I opted for Fat Free Ranch) and
you have a quick (and portable) lunch on the run. Or six of them…
Beez