IT Boys night seats for +Toronto Blue Jays vs. New York Yankees
Saturday (September 26) – Holy Moly! You may have noticed
the ‘significant gap’ between the posting dates (even though the actual were
posted within a couple of days of each other), but lots and lots has happened
since the last time at @CrossFitCanuck. You would think I would have learned my
lesson by now, but nope, more than 5 consecutive days missed. Ugh. Getting back
into the swing of things is tough, but rest assured I haven’t been sitting on
my laurels. Here’s a quick rundown of what’s been going on…
WeLift Battle of the Pairs 5 – I spent a Saturday
@CrossFitMozomo as @weliftathletics Head Judge for their Pairs competition. It
was a crazy long day on the feet and my newly acquired Fitbit says I covered
over 10,000 steps and 5KM without ever leaving the box. It was a lot of fun
(and work), but it seemed like everyone had a good time fighting through 4 very
challenging WODs. It still amazes me how hard the human body can work when
presented with a challenge. 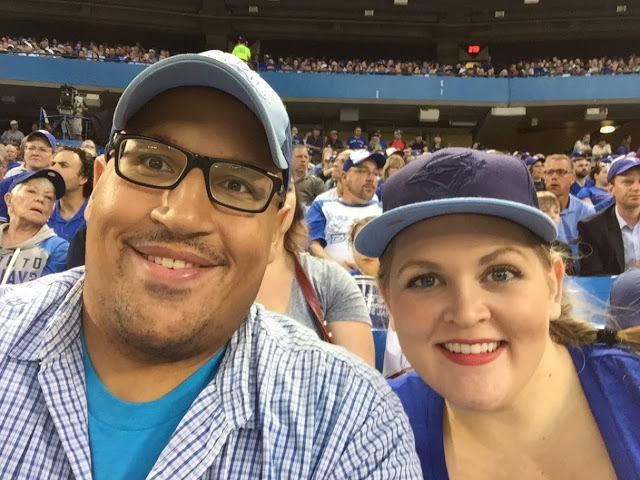 @SavannahJessie and I for game 3 of the series
Toronto Blue Jays – I’m not sure if you’ve noticed, but
since August, the @BlueJays have been hands down the hottest team in baseball. Still
as we entered the last few weeks of the season it was a precarious lead that
they held over the New York Yankees. Luckily, this was the week the IT Boys
purchased tickets for our yearly outing. In fact, I somehow ended up with
tickets for the most important games of the series (first and last) and
combined with @SavannahJessie proved to be a valuable good luck charm (they won
both games). 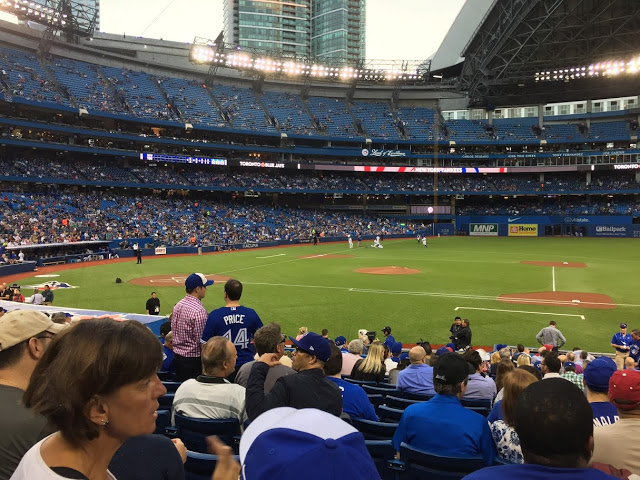 Our Seats for game 3! 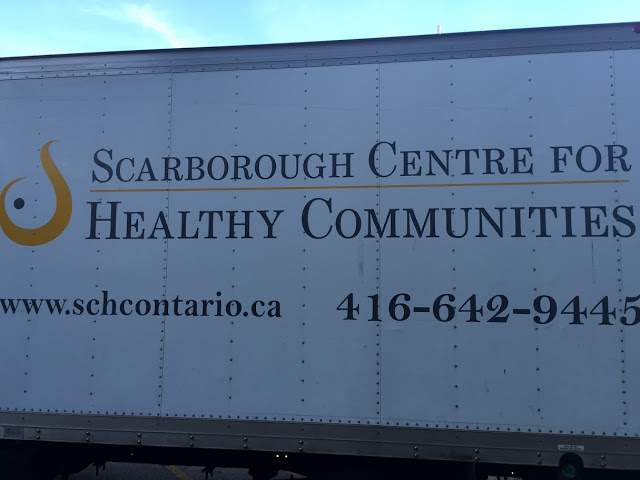 Canuck Cares – @CrossFitCanuck goes above and beyond every
year to try and give back to our community and back to school time was no
different.  With @SavannahJessie and
@zlreyes spearheading the campaign, Canuck Cares raised food and clothing for
the Scarborough Centre for Healthy Communities. SCHC will distribute these
donations to families in our area who are in need to ensure that they have food
and clothing as this new school year starts. Great work done by all CANUCKS!!!
Thank You!! 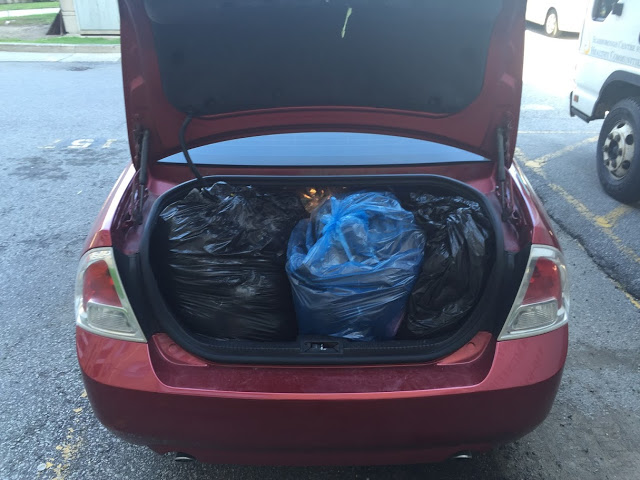 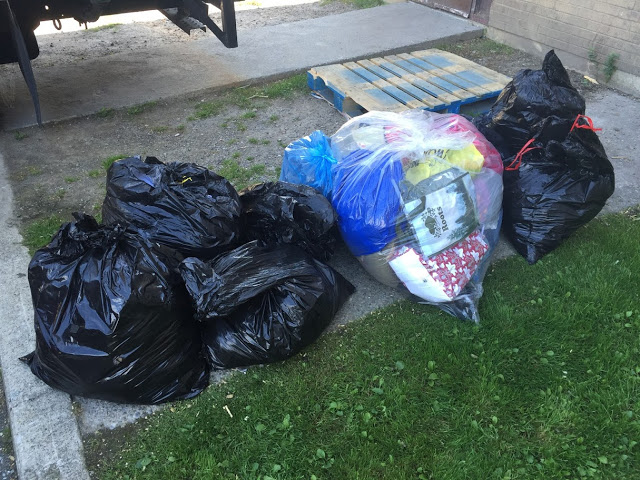 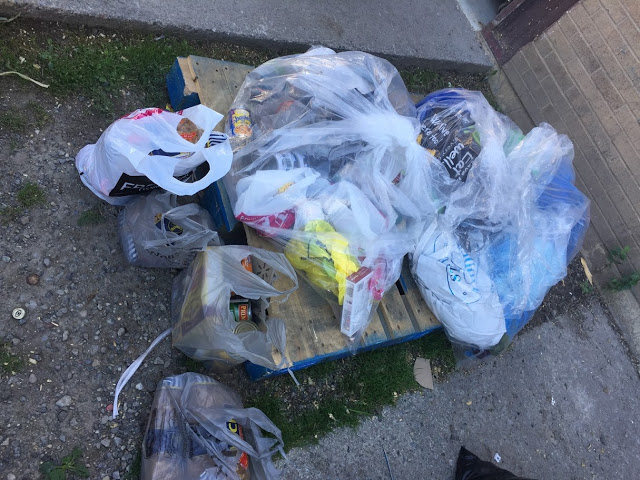 Clothes and Food!
Whew… See, it’s been busy. Now I’m sure you are thinking,
c’mon you can squeeze a workout or something in here. Seriously though, with
all of this and the continued renovations of the Big K, this kid has been wiped
out.  Thank goodness for Saturdays…
Warm-up
250m Row (slow)
200m Row (med)
Barbell Warm-up
Various Stretching 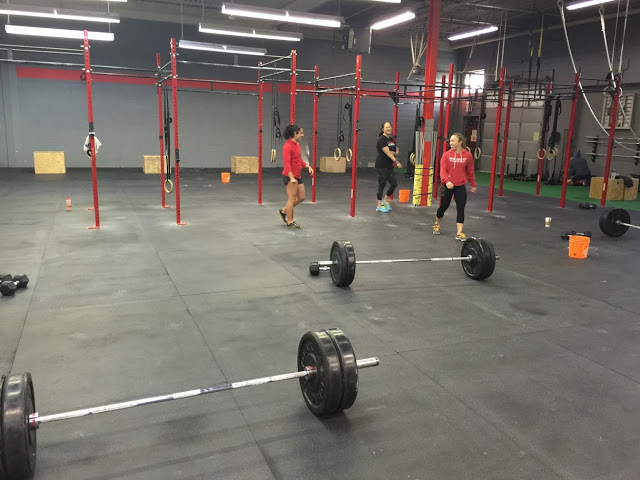 The Ladies getting ready for the THROWDOWN!
Now Saturdays are fun day. We get together in the morning,
pick a WOD and get right down to it. Sandwich, Danny, everything is fair game.
Every week someone picks a WOD and we throw down. More often than not, they are
spicy and quick. 15 minutes or less of all out go-go-go. Today it was our very
own Jillian’s (Tav) programming that we selected. We even went ‘Games’ style,
flipping the Box to mark our progress through the workout.
Tav (For Time)
50 Box Jumps (24”)
40 Pull-ups
30 Push Press (25lb Dumbbells)
20 Deadlifts (@225lbs)
10 Burpee Box Jump Overs (24”)
Ugh. This one was hard (well at least for me it was). The
Box Jumps were slow because I was doing step ups and the Pull-ups took forever
because I wanted to go RX. That meant singles all-day-long. Still, I’m pretty
excited that I managed to get them done. The only thing I had to scale was the
Push Press which was originally designed to be 50lb Dumbbells. I got through it
in 14m38s and it took a while before I could peel myself off the floor. A big
thank you to Tav, Ade, Lauren, Baz and Adam for cheering until the end.
Can you believe that it’s almost October? The summer is over,
and winter is knocking at the door (relax, it’s not here yet). The next 30 days
are going to be intense. I’ve talked about moving our workouts to the am, but I’m
finding it hard to get moving some days. I don’t know what the problem is, but I
just can’t get two feet on the floor. Combine that with a certification exam
(CCNA Wireless) that I need to write before mid-November and you have someone
who will have his nose stuffed into a textbook. Double-Ugh. Still, no excuses.
The work has to get done and we need to find a way. I’m just not sure what the
way is yet…
Beez