Skip to content
All You Can B: Bikes, Barbells and Bacon > CrossFit > Finding Something at the Rock Bottom
May 24, 2015February 18, 2019 BigBrnz 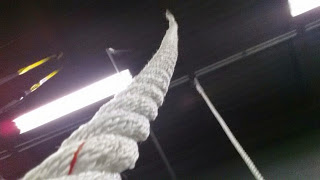 It’s going to be a long climb…
Wednesday (May 20) – It’s taken a long time to figure out
how to frame this post. No one likes to fail at anything (well, personally I hate
it) and when you are struck with an epic fail, how do you deal with it (never
mind having to put it into writing)? The worst part is, you’ve worked hard to
get to a place and through no fault of your own (for a change) something has
been taken away. What did I lose? The ability to a Squat with any type of load.
All that fight to overcome injury and mobility issues only to have a component
that the ‘Doctors’ say is just showing small signs of damage fail me. I get it,
I wasn’t easy on my body as I was growing up, but I would be more willing to
accept this new ‘normal’ if I had done something spectacular (and stupid) to
deserve it. This stupid thing aches and it is making me a very angry person as
a result. It’s time for a second opinion. @savannahjessie convinced me to see a
Naturopathic Doctor so we’ll see if there is help down another road. I’m not
going to take this laying down (get ready Ian, Core Strength will be getting a
visit too).
Warm-up
3 Rounds
200m Row
4 Pull-ups
8 Push-ups
12 Squats

We are deep into the Conjugate Method @CrossFitCanuck and I still have to say
that I am liking it. With the long break between WODs, my body has generally
been feeling much better (with the exception of my knee). We had some work that
would test the shoulder and hopefully if I went light enough would allow me to
work on range of motion.
4 minute EMOM
Back Squat
3@50%
3@60%
2×3@125lbs
Then…
9 minutes
Find 7RM Shoulder Press
Now I don’t really have a ‘valid’ Back Squat number and at
the weight I was moving, it was more a matter of trying to teach the body the
mechanics. It was still tough and I ached, but survived. The 7RM was an
interesting test and I managed to get to 100lbs there. If you remember waaayyyy
back, it was a 185lb Shoulder Press that sent me to Core Strength for repairs.
WOD
50 Wallballs (@14)
200m Run
15 Ring Dips (Green)
500m Row
15 Ring Dips
200m Run
50 Wallballs
14lbs? WTF? This is where the opening of this post came
from. I started out with 20lbs, figuring I would just take my time and chip
away at it. Nope. It hurt to move and even after I scaled to 14lbs it didn’t
feel any better. I was legitimately going to throw in the towel. GASP. I know,
can you believe it? Thanks to Coach G (@girmantitov), I kept going. He modified
the movement to just before I felt pain and not to go any deeper than that. It
wasn’t an RX Wallball, but at least I could keep going. The other components
felt really good (and made me feel better about the fiasco at the Wall). 12m06s
for my time.
We’ll have to see how the rest of the week will unfold. I’m
scheduled for Thursday morning, but I have to see how the recovery from this
one goes.
Now I have a question for you. I posted my first recipe
(with photos), what did you think? C’mon, I can take it. Positive or negative
feedback will help me make my posts better. The recipe was pretty vanilla
simple in geek terms), will you try it?
Beez