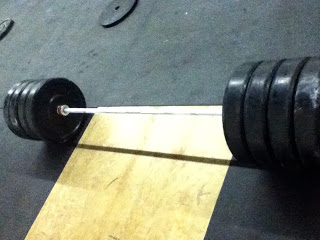 Wednesday (July 22) – I don’t understand how I was recovering and feeling fine two weeks ago doing two-a-days and now I’m knocked down. I feel totally out of kilter with this stupid hip. I had @Wardy_ work on it and it is feeling better, but I am a hot mess again. Today is the last day at @CrossFitCanuck before @savannahjessie and I head west for @jen_wis and Ryan’s wedding. I really want to make sure that the gains I have made over the last few weeks aren’t thrown away in a frenzy of booze, food and lounging, so I need to be able to function. On that note, we’re planning on hitting a box in Lloydminster and I’m packing my running gear (gasp, my first runs of the year).

Ok, so I am a little unclear on the exact warm-up, but what can you do, it’s been a while (and a lot has happened). Today was going to be a tough one. DUs and Bench Press. Heavy, heavy Bench Presses.  Now I have a heavy 1RM and with my current schedule, shoulder and general conditioning, I know that it would be a challenge to get near that number. Still the programming called for heavy and Coach Kimiko was nice enough to spot me for the first few rounds.

Scoring for the first component worked out to 52 DUs and 64 total Bench Presses. Those skips really took it out of me and I was tired from the Single-Single-Double method that I’m still using. By the time I got to the bar I was sucking wind pretty badly. The Games WOD was supposed to be a 30″ Box, but after a few warmup attempts my hip was having none of it.  24″ it is with Step-ups. The Deads were tough, but I hit most of them in groups of 5. My finish time was 7m56s.

I got sneak attacked by @savannahjessie with less than 30 seconds to play and got stuck doing Burpees. Thanks Baby. It was the only time I lost the abmat for the entire 4 minutes. Now I wasn’t really ‘feeling’ what was coming next, after the Deads, the DUs and a lack of between WOD eats. That my fault, preparation is half the battle and I wasn’t prepared.

Hot mess in progress. Out of kilter led to knee pain on the right leg (which has been fine for the last 3 weeks) during the Thrusters. Tav tried to give me some modifications, but my body did not have it.  In the AMRAP, the DUs increased by 5 each round while everything else went up by 1. I finished 5 rounds plus 1 Push-up. It was ugly. Even my mental self took a hit because things around me were seriously getting me upset. Do the work. That’s why we are all here. Don’t say you did if it wasn’t the case. Like I said, I was worn down today and this was just a by product.

It’s time for a break. I will be gone for a week and a bit, so hopefully everything figures itself out while we are gone. I’m going to miss the box, but it will be fun to check out a new one and to get some work in while we’re out west…