Skip to content
All You Can B: Bikes, Barbells and Bacon > CrossFit > Is That Jack LaLanne’s Younger Brother
September 17, 2013February 18, 2019 BigBrnz 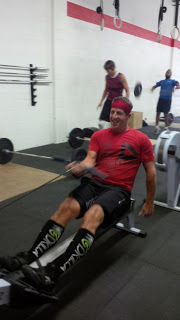 1 Arm Rowin’
Wowee! I will say this about my body after I complete long
runs, it absolutely and unequivocally hates my guts. You would think that after
8 weeks of running, my legs would have gotten the memo, we have some weight
that we have to carry a distance and there is no option for not doing. Now
granted my ankle is still locking up thanks to the bad step last Wednesday, but
I’m hoping that Dr. Spin can get everything gliding and sliding like it’s
supposed too. I negative side effect of having now dorsi flexion is that it
makes Squatting with good form (overhead/front/back) even more adventurous. And
by adventurous I mean wide feet. Sorry Jillian as much as the hips are slowly
learning to open and close, they can only do so much with a ‘slightly’ wider
stance (I will be cognizant and try and narrow it down). 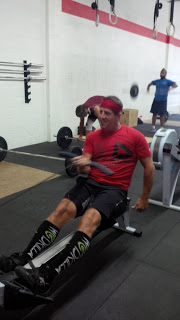 Warm-up ‘A’
400m Run
Tonight it was tough not to sit back and watch the hot mess
of @keilshammer as he gets back into the @CrossFitCanuck way after a long
summer off. Hatch was our mission tonight and it sucks, but I have been off
program for a while. My focus has been getting depth instead of worrying about
pushing huge numbers. With the new high temp 10lb plates I completed the 5
rounds of 5 reps @115lbs Back Squat. Not heavy but I was really pleased with
how deep into the hole I was going. We flipped around and did 4 rounds of 5
reps in Front Squat. I stayed on the plates and it felt really good, chest up
and good depth at the same 115lbs. Now before you think we were finished, we
had a 5 minute EMOM of Shoulder Press (strict), 2x Push Press and 3x Split Jerk
@95lbs. I wanted to load up, but with the strict Shoulder Press I didn’t want
to overstress the shoulder.
WOD (12 minute CAP)
2 Rounds of
400m Run
12 HSPU (Box)
16 Pull-ups (Green Band)
20 Hang Power Cleans (@115lbs)
*then with remaining time
AMRAP
Ground to Overhead
So your score for the WOD is the number of Ground to
Overhead. I got to 8! The Power Cleans felt nice and quick and I took 10
seconds off my 400m run (1m59s). The WOD was crispy, but it was a whole bunch
of fun. 2 takeaways though, first Jillian wants me to band down to Purple. Now I
was at Purple and went up to Green/Blue when I hurt my shoulder and I think it’s
time we start building again. The other comes from @keilshammer who suggests
that it is time to move to the wall. I’ve been a bit gun shy since my first
attempt at kicking up to a handstand, but it might be time. I think Thursday
after class I might need to get some practice in.
Cash-out
3 Rounds of
100m Sprint
5 Tire Flips
I loves me some Tire Flips! Even the Sprints today felt
really good although I was very cautious about stressing out the ankle. I did
go all out on the last sprint and I think even @keilshammer was impressed. I’m
still really quick over short distances. I think I need to add more Sprints to
my weekly regime as it will probably help my distance running in the long run.
Tempo, Tempo and more Tempo.
BWOD
50 GHD Sit-ups
Hip Stretches
Back Rollout
Now the WLC bonus this week is 100 Burpees in 10 minutes and
we were all excited to do it after class. Until we did class. That needs to
happen before Sunday, but I was pretty gassed tonight (and have been the last
couple of weeks) which is a bit upsetting. The goal this week is to get 3 more
runs in this week, but we’ll have to see how the legs hold up. The weight has
been dropping at a pretty good clip so far and it looks like I’ll be in the
market for new pants again. It looks like the Challenge is doing its job…
Tonight’s Word: Costco
Beez 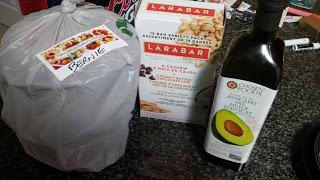 Avacado Oil and healthy snacks for the WLC… Oh and PaleoMealsDelivery.ca Goodness!