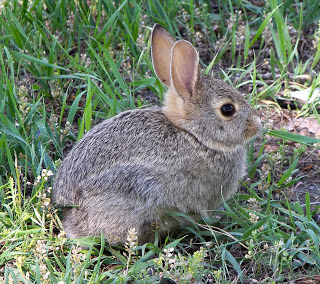 Wabbits? Yes Wabbits. I woke up this morning with less than
zero desire to do anything athletic, but in true Glutton for Punishment
fashion, I got up. I was excited because my new running jacket finally came in
from Reebok. Actually I had purchased it a month ago in 2XL, got it, tried it
and literally heard Jillian’s voice yelling at me for buying things that were
too big. I had already cut the tags so I figured I would keep it. When I put it
on the first time I noticed some discoloration and sent it back for a new one
(and they replaced it with an XL). So before the crack of early I was pounding
the pavement on a rather poorly lit road when I came across something fuzzy in
my path. I should point out that I was a bit paranoid about running into a
skunk, so when I saw this ‘thing’, there was a MASSIVE JUMP sideways. Picture a
80’s Tom and Jerry cartoon where the Suburban Housewife is on the chair
screaming when she comes across a mouse. Just like that, minus the noise. 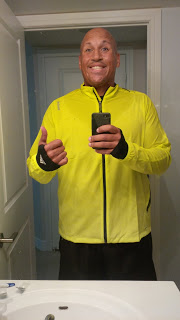 Luckily Peter Rabbit decided he didn’t want to duke it out (Michael
Jackson in Beat It style) and I was allowed to continue…
Now I am still trying to embrace my inner runner (although I
think he ran away when I was 12 and is sitting on a beach somewhere drinking
cocktails)so I haven’t actively sought out tough runs. Hills scare me. I think
it had something to do with high school football. Coach Ryan would have us run
The Hill whenever we did something stupid and since then, well, I like flat
ground. Today however I went after a hill. My course today took me to the
bottom of Hogs Hollow (York Mills and Yonge) and I faced the long climb back up
to Yonge and Sheppard.
I DID NOT STOP.
That’s right, 25+ minutes into a run I make the turn onto
Yonge St and face the hill head on. No stopping, good pace and a slightly
winded (but Victorious) Beez at the top. 5.95KM in 40m36s with a pace of 6m50s
per KM. Considering the hills I was pretty happy with that pace. My average
heart rate was 150 BPM and I maxed at 172 BPM. I really tried to keep a higher
pace than normal to get a good workout and to push my body outside the comfort
zone.  My run cadence average was 79 SPM
(strikes per minute), but I’m chalking that up to the hill. I even managed a
max cadence of 102 SPM (YAY!).
I haven’t been feeling super, but I need to pick up the pace
as I head into the last 5 weeks of training. Happy Thursday,
Beez