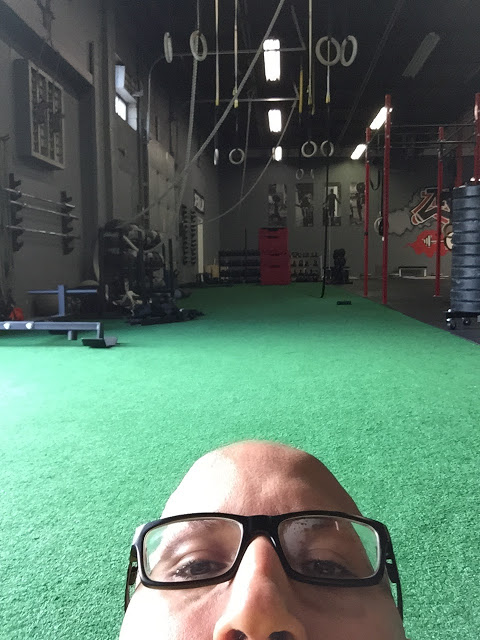 Post WOD/Cash-out Stretching
Monday (June 22) – Do you know what DOMS is? No? My bet is
that you probably do, you just didn’t know what it was called. DOMS is Delayed
Onset Muscle Soreness and it is your reward for working out, working hard or
treating your body like an amusement park. OK, maybe not so much the last one,
that might just give you a hangover. When you workout you are basically tearing
the muscle fibers and forcing the body to repair and rebuild them. Just like
the 6 Million Dollar Man, making you better, faster, stronger. Some people hurt
the next day, Me, I hurt two days later. Guess what Monday is? Two days later
and we have Burpees on deck. Is it too late to roll over, smash the phone and
sleep for the rest of the week? Bah, like that was even an option.
Warm-up
400m Run
5x Junk Yard Dog
Plank
My legs are going to fall off. My arms hurt. I’m tired. All
these thoughts rattled around in my giant noggin as I traversed the first 100m
of today’s warm-up. It was rough. The part that stung, was it was a nice day,
Tav (@CanuckCoach) is back coaching regularly and the rest of the 6am Class
seemed pretty upbeat. OK, I need to shake this funk, maybe some Snatches will
make me feel better. Say What? I’ve never been one who particularly enjoyed
this lift, mostly because of my mobility issues, but this was my first chance
to apply the tips that Jon North (@attitudenation) gave me.
Snatch
Every 2 minutes for 14 minutes
2@70%
2@75%
2@80%
1@85%
1@90%
2×1@105lbs
then…
ME Pull-ups
2015 Granite Games Qualifier
10 minute AMRAP
5 Power Cleans (@135lbs)
7 Bar Facing Burpees
Yeah, don’t miss the ME Pull-ups, because we were doing them
after each Snatch. My shoulders were BURNING. Today was still hit and miss for
the most part, I had trouble with the Pull-ups and the Snatches were inconsistent.
Well, all but the second last one. Whatever clicked (and it may have been by
coincidence), but the contact on the hip was solid, weight was in my heels and I
was locked out (catching in the hole). Well color me impressed. Even Tav
excited. Now, all I have to do is figure out how to do it every time. Geez, the
list of things to work on keeps getting longer. We moved right to the conditioning
component with was a 10 minute burner. EFFICIENCY! ARGH, it is frustrating to
burn energy (and to know it) without being able to fix it. My Burpees are still
slow and as a result they sapped my energy, bigtime. Still I did manage to get
62 reps in. Not bad, all things considered.
Cash-out
4x400m Run
People ask me how I managed to finish a Half Marathon. I’m
guessing mostly because I don’t really have a traditional runner’s shape. OK,
honestly there are very few runners that have my shape, but I won’t quit. It
may not sound like much, but when the tunnel vision starts and you want to just
stop, that is the time where you have to dig deep and keep going. You draw on
whatever you can to find the energy to keep putting one foot in front of the
other. Today’s distance was a lot shorter, but the feeling was the same.
Halfway through my first lap I would have been content to walk in the front
door and call it a day. Suck it up princess, your journey doesn’t get to the
end by taking that exit. Time to get serious and do the work.
BWOD
Glute Stretch
Hip Stretches
Back Stretch
Samson Stretch
The body was done after this. I did flirt with the idea of
maybe doing a double today, but I nearly fell over picking up a 5lb plate at
530pm so I decided to call it a day. Exciting news on the coaching front
though, I signed up to take the Catalyst Weightlifting Certification. It’s time
to cram a little more into the grey matter and being able to really teach the
Olympic Lifts is a really exciting thing. I know, I’m a geek at his finest. Anyway,
Tuesday is a rest day and Wednesday and Thursday are my next scheduled WODs. Hopefully
the DOMS is gone and all cylinders are firing.
Beez