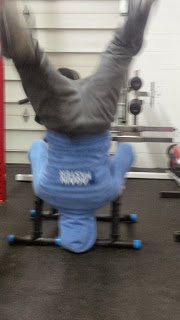 Jeepers Creepers (c’mon, just a little festive humor), my
abs are on secret fire. Secret Fire? Yup, they were fine all day long, but on
my first pull on the Rower my midsection caught fire. Where the heck did that
come from? Oh, right, V-ups and a million Abmat Sit-ups. Now normally Tuesday isn’t
my normal night to be at the box, but there was 0 chance I was running this
morning and with a busy tail end of the week I need to make sure to get my work
done. I wasn’t feeling great today (seem to be running a bit low on energy),
but I figured that a nice tough WOD would pick me up. Well it sort of did.
Warm-up
400m Row
2 Rounds of
10 Push-ups
10 Good Mornings
10 Scorpion Kicks
As soon as I started getting loose with the PVC I was aware
that my shoulder was going to be a bit of a jerk today.  It was more Bulgarian lifting time. First up
a 4 minute EMOM of Clean & Jerk @145lbs. It was a little lighter than the
88% recommended, but it was the right move today. We followed that up right
away with a 3 minute every 90 second Clean & Jerk @135 (which was at my
73%). I did learn something about lifting today, I do not like doing it in my
Nano’s. They are too flexible and a couple of times I almost reinjured my left
big toe (turf toe which took forever to heal). Just the kind of week that I’m
having I guess, little things adding up.
The Ladder (20 minute CAP)
2 Snatch (@95lbs)
200m Run
5 HSPU (Box)
2 Snatch (@105lbs)
200m Run
5 HSPU (Box)
2 Snatch (@115lbs)
200m Run
5 HSPU (Box)
2 Snatch (@125lbs)
200m Run
5 HSPU (Box)
2 Snatch (@135lbs)
200m Run
5 HSPU (Box)
2 Snatch (@145lbs, Failed 2 Attempts)
200m Run
5 HSPU (Box)
2 Snatch (@135lbs, Failed 2 Attempts)
200m Run
The first few rounds felt really good and I was hopeful that
I would be able to set a new 1RM (old one is 145lbs). The Runs were a bit brisk
(ok, honestly they were cold), but the cold gave you a slap that got you ready
for the next round. Right up until I went for the 145lb attempt I was sure I was
going to nail it and the lift that followed it (should have been 155lbs). I got
the bar up high on the pull, but I couldn’t get under it and I couldn’t lock
out my left arm. Stupid arm. For now I will just have to be happy with what I did.
Cash-out
30 Seconds of ‘L’ Sits
Now the original Cash-out was for 90 seconds, but my
shoulder was not having any of it. There was a whole lot of entertainment
though for the #530Crew. Everyone looks awesome when doing ‘L’ Sits, but
@girmantitiov took the cake when he went from the Sit into a Handstand (sort of).
While the photo looks like he nailed it,
gravity disagreed with his attempt.
BWOD
Hip Stretches
Quad Stretches
Forearm Stretches
Back Rollout
Lacrosse Ball
No Coach G’s were harmed in the making of this post,
Beez