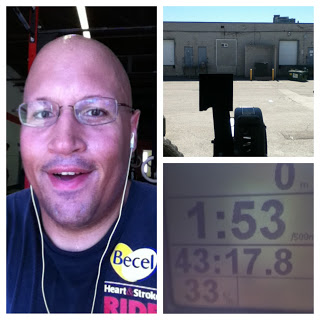 Well after trying to recover from what was a crazy tough
(but FUN) Hero WOD, clearly there were some Canucks who needed more. Who knew
that I would be one of them? It was a strange aftermath after yesterday’s WOD.
I wanted to do some cooking and prep work, but for some reason my couch had its
own gravitational pull. After a late night watching the Leafs even their
playoff series and eating a giant steak (and some not quite healthy snacks) I had
a terrible nights’ sleep. I tossed and turned and just couldn’t get
comfortable.
Instead of lying around though, I suited up, grabbed a
Grande Pike and headed out for a nice 7KM walk to try and loosen up my stiff
body. It was a gorgeous morning and a nice way to start a Sunday. I got home
and was watching a bit of the Penguins vs. Islanders game thinking to myself
that it might be nice if there was open gym at @CrossFitCanuck today. Queue the
tweet.
CrossFit Canuck ‏@CrossFitCanuck
– Happy Greek Easter! OPEN GYM: 130pm – 4pm! #crossfit
#greek
#easter
LIFT BIG & EAT BIG!
SWEET! After an eventful drive in (and only a bit of yelling
at the Numpty doing 85KM/H in the passing lane of the 401), I was in attendance
for my FIRST EVER Sunday WOD. I wasn’t the only Murph survivor that made the
trek in, but unlike @zlreyes and @SarahBassels, I wasn’t sure what the heck I was
going to do (what I was sure of was I wouldn’t be lifting anything overhead).
Most of my upper body was very crispy and with the nice weather Jillian will
probably have us running on Monday.
hmmm… what to do?
I know, I haven’t been on the rower in a while, if I take it
easy it should be good. Ok, what distance? How about a nice easy 10,000m. At
this point someone (me) should have realized this was a big undertaking.  I figured it out at about the 3,000m mark.
This would be my longest ever Row. With the roll-up door open and the music
blasting, I finished in 43m17s. This time seems a bit slow, but I was grabbing
liquid about every 1,500m to make sure I didn’t overheat. A little work with
the lacrosse ball and a Back Rollout and I was finished.
Let’s hope Monday isn’t too crazy,
Beez