Just took the wraps off…
So I’ve been trying to squeeze a lot of
stuff in between New York and July 20th. What’s the big deal about
the 20th? Well that’s the day I took my beleaguered (yes, cross that
off the bucket list, I’ve used beleaguered in a post) left knee to repair shop
to find out what is going on in there (because the MRI was inconclusive, go
figure). Before I go in though I’m trying to get my body ready for a little bit
of downtime by doing as much as physically possible. Canuck Lite has started
again and I was hitting the regular class with the #530Crew and then straight
to Coach Z’s (@zlreyes) Lite. What a ride it has been. The programming has been
crazy intense and a super amount of fun. If you have the chance, you have to
give it a spin.
The plan started off pretty well and I was
doing well. Sadly, the last two classes I could feel my body starting to break
down from the effort. My right knee started aching (from compensating for the
left) and I just couldn’t seem to find enough air to keep the body moving at
full power. The stupid hot temperatures may have had something to do with it
too, but I don’t control the weather (yet). Still, it is always worthwhile to
do work no matter what and I did what I could.
Leading up to the ‘Scope’ I will tell you
that I was nervous. Not crazy scared or anything, I’ve been through the
procedure before, but surgery is still surgery. Anything can happen and I’ve
seen friends run into complications (infections) before. Still if there is the
chance to get this fixed to the point you don’t have to read about it anymore,
well @keilshammer will be a fan of that. 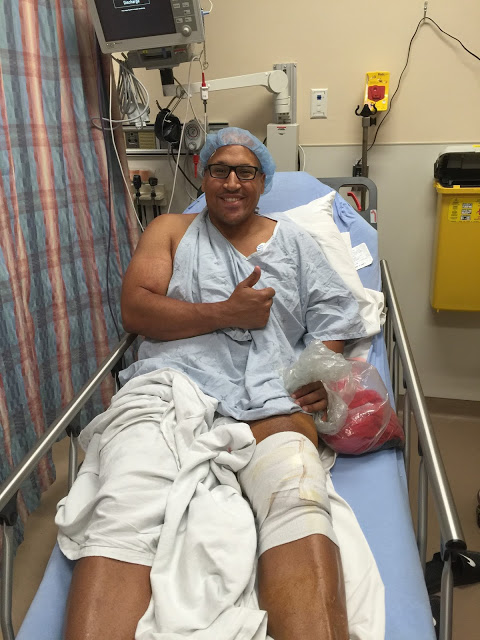 In a haze of anesthetic
The surgery went well (I think. I won’t
know until the first week in August when I get my follow-up) and aside some
anesthetic induced shenanigans (don’t worry I’m certified and more then capable
of removing my own IV), everything went off without a hitch. As always I was
starving and after eating a not too healthy lunch (sometimes you just need to
hit up Taco Bell) it was a day with the leg up in a CryoCuff. 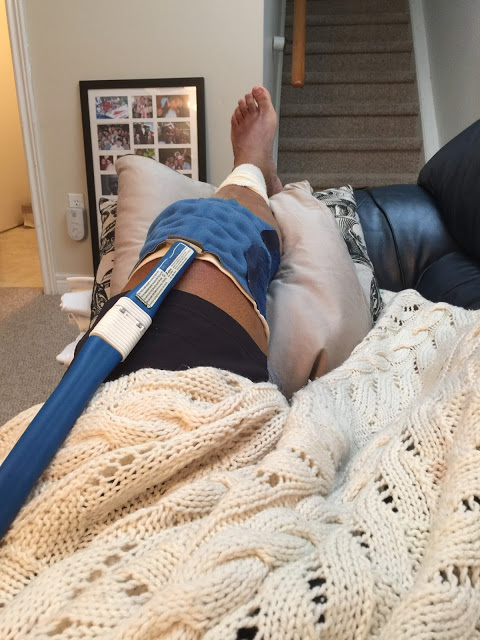 Ice water flow to keep swelling down…
Now clearly age plays a factor in recovery,
but I didn’t think it would affect me this much.  I figured I would be back to work on
Thursday, hobbled, but able to function. Yeah, not so much. Between the pain
meds and stiffness, I was glued to the couch. It was frustrating. Still you can
see why (first picture), when I removed the dressings, my knee was still the
size of a small elephants. I can move, and have been trying to get mobile (as
per doctors orders), but the going is slow. ARRRGGGGHHHHH!!! 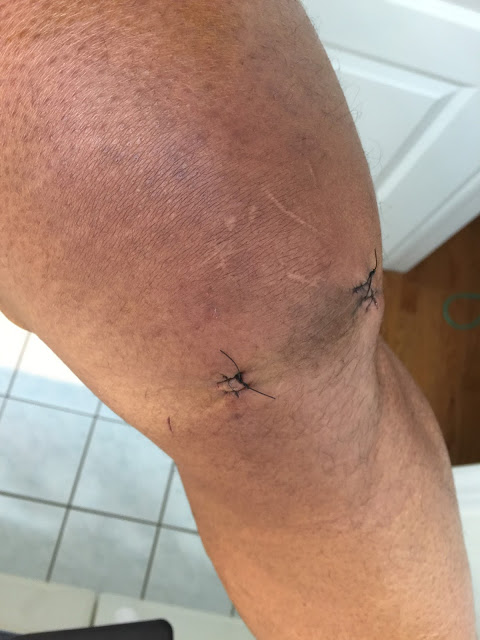 Eww… Stitches
I won’t be able to do a whole lot in the
upcoming week I feel, but I will do what I can. Sit-ups, Push-ups and maybe
some dumbbell work. Until then, you will have to put up with just life based
postings.
Happy Saturday,
Beez