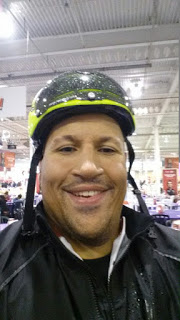 Post Ride, trying to thaw out…
Sunday (May 31) – Well, it can’t rain all
the time. Can it? That line was sung by the late Brandon Lee in the 1994 movie
The Crow. After Sunday, I will respectfully disagree with Mr. Lee and add that
not only can it rain all the time, but it can be near sub zero too. I really
can’t complain too much, most year’s we have warm temperatures and sunshine,
but we normally have @keilshammer riding with us too and the sun tends to
follow him around (insert joke here).  Anyways the weather was absolutely brutal, but
because I asked and you donated, I was obligated to get myself to the CNE and
pound the pedals. 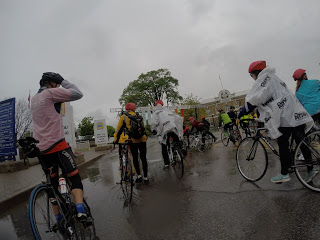 This year I was the only 75KM rider, but
because of the cold and wet weather conditions I decided to only do 50KM. The
Garmin said it 6.5 degrees Celsius and it felt colder (but not as cold as my
first Ride for Heart where I was sure it was snowing).  I was on my own so there was no real reason to
hold back. I got into the chute, spent about 5 minutes getting warmed up and
then started to pick up the tempo. The key today would be to keep the bike as
upright as possible and stay away from any standing water.

A lot of people seemed to not show up this
year so the early route was pretty empty. There were still a bunch of people
who don’t understand the concept of ‘IF YOU ARE SLOW, GET RIGHT’, but for the
most part it was all right. Sadly, because of the conditions I couldn’t really
go all out at my 2 favorite spots (the big swooping left hander where you turn
onto the DVP and on the big hill at Lawrence).
Ride in a Nutshell

Somehow I managed to forget my heart rate
strap (again) so I had no data, but I am pretty sure that I didn’t red line at
any point. I was a little slower then in previous years, but I felt a whole lot
stronger on the bike. In fact, the only time I felt better was last year after
riding 225KM in France in the days leading up to the Ride. I covered 45.98KMs
today at an average speed of 23.9KM/H. My top speed was 51KM/H which is about
9KM/H slower then in previous years. I have a very cool cadence stat thanks to
the new computer, cadence. My average cadence was 84RPM with a max of 126RPM
and for the duration of the ride I made 8,243 revolutions. Crazy eh? 8,000+
revolutions in less than 2 hours. Total calories burned, 3,021. 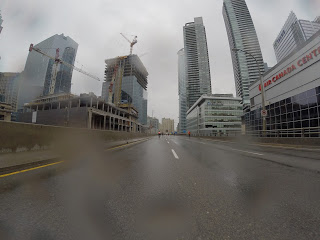 OK, enough out of me. I have appointments
scheduled with Ian and Dr. Dunk this week, so I will provide an update later
this week. Thanks to everyone who donated to my ride, Thank You for the
support. Thanks to the Heart and Stroke Foundation for hosting the ride and
making some changes that increased the enjoyment by about 10x. Well done.
Beez
Bonus: So I have a PSA for those of you living in the downtown Toronto area. @Savannahjessie and I went out on Friday night and headed to one of the oldest restaurants in town, The Senator. A lot of people say that the Senator has the best burger in the city. I put it to the test. The verdict? The might be right, because that burger was a thing of beauty (see below). If you live in town or are visiting, do yourself a favour… Eat here…