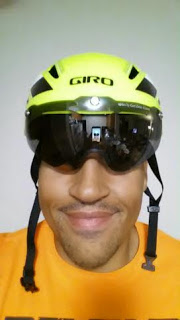 Safety First!
Sunday (May 3) – It’s the first nice
weekend of the YEAR!!! The bikes are now moved north and it is time to explore
the neighborhood. I’ve been Google mapping the area around here and there are a
lot of ‘quiet’ roads that I just couldn’t find when we lived at Yonge/Sheppard.
Since this is the first time in the saddle in a LONG time, I mapped out a nice
easy 20KM and hoped to make it in a decent time.
When the alarm went off it was a struggle
to get moving, but the hard part was getting all the gear together (it is
scattered everywhere after the move). Tires pumped, bike shorts, shoes and
helmet. Looks like I’m good to go. This will also be the inaugural ride for my
new bike computer. I am just A LITTLE excited. I managed to get out of the door
(45 minutes late) and headed up Bathurst. The route went up to the King Road,
back down Yonge and then back home.
I covered 20.62KM in 50m52s. I wasn’t going
crazy hard and there were some good little hills, but overall I am very happy
with the first one of the year.  The bike
felt good and I felt pretty strong in the saddle. Somehow I forgot my heartrate
monitor so no stats there, but my new cadence and speed sensors both worked
like a charm. I averaged 82RPM (slightly below the target of 90) and maxed out
at 118RPM. The Garmin says I burned 1,213 calories which is a great was to
spend the morning.
My goal is to get out once a week for at
least 20KM (hopefully I will be able to stretch some of the rides over 40KMs).
It will be tough to roll out of the sack, but if I can get out early the roads
are wide open and the rides should be sweet.
Catch you later,
Beez