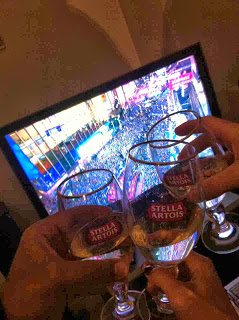 Happy New Year!
Well we have sent 2013 off into the sunset and welcomed 2014
with open arms. It has been a recovery day of sorts, but it did include a visit
to @CrossFitCanuck. Now after having been up past my bedtime to celebrate
2014’s arrival, I really did consider ‘snaking’ the WOD after seeing the
craziness that Tavia had in store for us. Seriously though, that is NO WAY to
start a new year. Dragging a bit, I made my arrival and slowly warmed up. Very
slowly. Sometimes just getting there can be a win.
Warm-up
800m Row
3 minute Cindy-ish
5 Beat Swings
5 Pull-ups
10 Push-ups
15 Squats 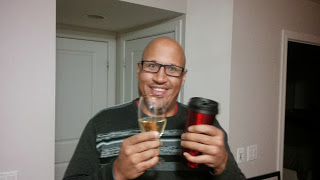 Cheers!
Considering that I may have been perspiring various
alcohols, I felt decent after the Warm-up, especially the Pull-ups. It wasn’t
my normal push, but I was satisfied with the output. Today was going to be a
combo platter of movements and this was going to be a case of working as hard
as I could, not necessarily going RX.
“Isa-Squat”
30 Front Squats (@105lbs)
ANNIE
50 – 40 – 30 – 20 – 10 Reps of
Calorie Row
Abmat Sit-ups
@SarahBassels and I were doing Front Squats instead of working
overhead. All out, as quickly as possible. I broke the Squats into sets of 5
and finished them in 3m12s. All things considered, I will take that. Annie was
a different story though. Instead of DUs, I was doing Calorie Rows. I couldn’t
get into a grove and managed to get 19 of the 20 calories in the second last
Row. It was a 20 minute overall CAP for the 2 workouts combined.
Liquid Cocaine
5 Rounds for Time
5 Power Cleans (@105lbs)
10 Chest to Bar Pull-ups (Green Band)
Wow. That was serious. The C2B Pull-ups were really tough,
but I broke them up into sets of 5 and that made it easier. I was gassed when I
yelled time at 7m41s. Congratulations to all the Canucks who made it out to
ring in WOD Number 1 of 2014!
Now as we take the plastic wrap off a new calendar, it’s
time to make my goals for the upcoming year public. That’s one of the beautiful
(and terrifying) things about this blog. You are held accountable for what you
write down. If you tell people you are going to do it, you move heaven and
earth to do it.  This year will be busy.
Very busy.
2014 Goals
250lb Weight
2h25m Half Marathon
CrossFit Level 1 Certification
CrossFit Open
CrossFit Comp
Nothing like shooting for the moon. Some of the goals are
obvious. 250lbs will be tough to get to, but I think that will be a healthy
weight for my frame. I completed my first Half Marathon, but missed my time
goal by 7 minutes. I want those 7 minutes and another 5. As I have gone deeper
into CrossFit I realized that I want to coach at some point and the Level 1 is
the first step. The Open. Obviously. The last one I was nervous about putting
into writing. Last year @matt_5577 told me he wanted to compete at a comp with
me. That scares me because he is a machine and I don’t want to let him down.
Well it’s the things that scare you that are the ones that are the most
challenging and fun (i.e. Half Marathon last year). So Matt, this summer. It’s
on.
Hopefully you had a safe welcome to 2014. Get ready, it’s
going to be a big year!
Beez