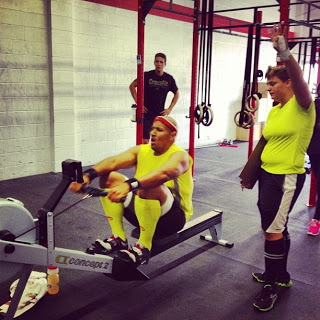 The fall is upon us as we run into this Labor Day Long
Weekend and @CrossFitCanuck was hosting the First Annual Canuck Games. Now this
is my first ever ‘competition’ (even though it’s for fun) as I was taking
pictures during the Open and completing those events on my own. This time it
would be game on to see what my body would be capable of. The events would be
announced just prior to doing them and there would be 4 divisions competing
(Men’s/Ladies Scaled and RX). We also had a quick info session regarding the 8
week Whole Life Challenge which would be starting next week.  I was pretty tired because Poppa C and I had
a Father-Son night out and caught the Blue Jays beat the Royals (thanks
@Nipshank_FF). Add to that the Wasaga Olympic Distance Triathlon Relay next
Saturday and you have a full plate for yours truly. 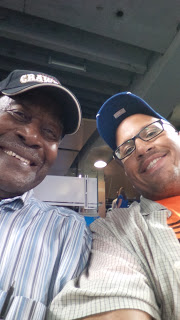 Warm-up
500m Row
400m Run
Without knowing what was coming I loosened up and did some
stretching (and hoping that Rope Climbs would not be part of the competition). Jillian
gathered us all together and laid out the rules and scoring for everyone along
with the heats.
Event #1 – Jackie (10 minute CAP)
1000m Row
50 Thrusters (@45lbs)
30 Pull-ups
WOOHOO! An event that is two-thirds designed for me. The
only worrying part was the Pull-ups and the time/rep penalty I would have to
take if I wanted to use the bands (not that I had a choice). I went with the
Green Band (30 second/6 Rep penalty) and hoped that I would be able to get all
30 in. We sat down to it and it was wicked! I had a strong row (1st
off) and got right into the Thrusters. I had to break them up towards the end,
but I didn’t put the bar down and I got to parallel (@sarahbassels has the
picture to prove it). 1st one to the rig, but this is where the
trouble started. Halfway through my shoulder was SHREDDED and I really struggled
to finish. In fact I ended up capping out at 29 Reps (still pissed off about
that). I had 5 attempts at the last rep, but I could not get farther than my
nose (even went switch grip to see if that would help). Thanks to Robin (my
judge) who made sure that I was motivated to never stop.
Event #2 – “Walking Wall of Snatch” (10 minute CAP)
Ladder of
1 Wall Walk
1 Snatch + 3 OHS
So this one sounds ugly, but was actually really fun. You
pick your starting weight (and you have to hit it) and then do 3 Overhead
Squats. You then do 2 Wall Walks and 2 Snatch (+ 3OHS) and so on. The catch is
you can only increase your weight by 5lbs per round and scoring is the final
successful Snatch Complex weight plus the total number of Wall Walks. Now the
scoring criteria for the Wall Walks was that thighs had to touch the wall and
the ground to count as a rep. Just for your records, I have never had my thighs
tough the wall on a Wall Walk. With shoulder in mind (and the knowledge that my
1RM OHS was 75lbs) I opened up at 85lbs and prayed for the best. Lo and behold,
this brother can get his thighs to the wall AND set a 25lb PR for the OHS! 4
full rounds complete.
Event #3 – “DU Shuttle” (5 minute CAP)
30 DUs
5 Box Jumps
Shuttle Run (5m – 10m – 15m – 20m)
5 Box Jumps
Now this was the final event of the round robin and the top
4 competitors would advance to the finals.
We also had the choice of doing 30DUs or 120 singles. I made the choice
to do the doubles (a little rash perhaps, but I wanted to do as close to RX as
possible). Effin DUs. I had trouble stringing them together and I had another
Rope blowout. Those two factors made it impossible to finish in the top 2, but I
was happy with my effort and I never quit. I have also just purchased a new
Rope (that’s right the cheese grater is coming so I better figure out DUs in a
hurry). I ended up being tied for 5th overall in Men’s Scaled. Yes, I
will take that.
The final WOD of the day was called GymNasty and secretly I think
I was happy I didn’t make the top 4 (this year). Rope Climbs, HSPU, Toes to
Bar, Ring Dips and then Grace. I was kind of jealous I couldn’t do Grace with
everyone else. It was inspiring to watch the Canucks that did compete because
they gave their all. 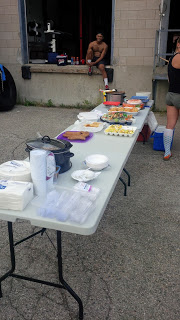 The First Half of the Feast!
Congratulations to the winners, @MissAde3, @zlreyes, Denise
and Darryl and to all the Canucks that competed. Also I huge THANK YOU to Tavia
and Sue Ann for putting this event on for us (and to @sarahbassels, @defconRX
and all the other judges).  No day would
be complete without an all-out Canuck Feast and a special guest appearance by non-other
than J.J. Van Damme! I wish I could have stayed longer to hang out, but my body
turned on the homing beacon and I had to get to my bed. 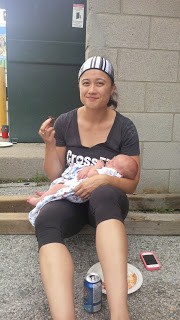 Have a great (and safe) long weekend,