Emergency Taping﻿
I know Douglas Adams talked about the importance of towels
for interstellar travelers in the Hitchhiker’s Guide to the Galaxy (and if you
haven’t read it, skip the movie and head to the library), but for a CrossFitter
I have to say the humble sock may trump the towel. Really? Yes, Really. Simply
ask @sarahbassels, Kris and Denise when they discovered (much to their
collective horror I’m sure) that the @CrossFitCanuck mystery WOD of Saturday
included everyone’s favorite, Rope Climbs. Emergency socks were somehow
forgotten, tape was franticly purchased and the ladies came up with some
innovative approaches for leg preservation. Here there be VIKINGS!
Warm-up ‘A’
400m Run
3 Rounds of
5 Push-ups
5 Ball Slams (@14lbs)
Then…
500m Row
Now after a whole day off I was feeling pretty decent, even
though I was tired. I had to work late to replace a switch at work and was
hoping to boogey down to the Argos game, but sadly Cisco makes things more
complicated than necessary and what should have been a 30 minute job turned
into a 3 hour ordeal (stupid vLANs). With everything up and running and some
celebratory beers it was an early wake up call for coffee and to feed some cats
(ensuring survival for some friends). Today we were working on something new,
Heavy Floor Press. I can’t recall having done these before and they were
followed by 20 Floor Wipers (ugh). Every 3 minutes for 9 minutes we completed
the two movements and by the end, my triceps were screaming. That was just the
appetizer today though. Tavia said I would like today’s WOD and she was right. 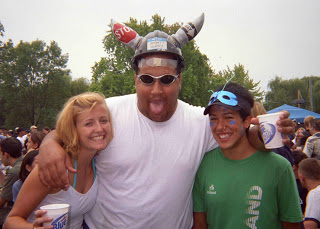 Beez as a Viking circa 1997
Viking
2000m Row
1 mile Run
7 Rope Climbs (attempts count)
150 Sledgehammers
This is right up my alley and though there was initially a CAP,
Jillian changed her mind and everyone finished. The part that had me most
excited was the row which I finished in 7:06.1, beating my PR by 29 seconds!!!
I had a sub 7 minute going until the last 250m when I started to get gassed. The
run was tough for the first lap, but like I tell anyone that will listen, just
get a pace that you can maintain. The trouble for me started with the Rope
(grrrrrr….). I could not lock my feet for love or money and even though the
shoulder wasn’t complaining too much, I struggled. I finished in 26m20s which
for me was a pretty good time.
By the time everyone was done I was pretty crispy. My hips
were voicing their displeasure about all the running this week and the new
homework from Jillian. I attempted to BWOD after class, but after 5 Squats of
the new Tavia Complex on the plates I started to get dizzy so I rolled out
instead.
There was lots of things on tap for today including Scott
and Michelle’s Baby Shower (more like a gathering of old friends), some BBQ’ing
and a surprise visit to Jenner’s 41st with @nipshank_FF and Marnie.
Sunday there is an 8K run scheduled, but we’ll have to see. 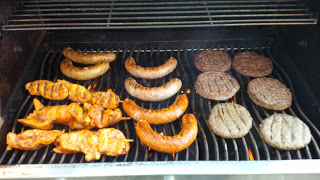