Skip to content
All You Can B: Bikes, Barbells and Bacon > CrossFit > Happy Happy and More Double Unders
August 30, 2013February 18, 2019 BigBrnz 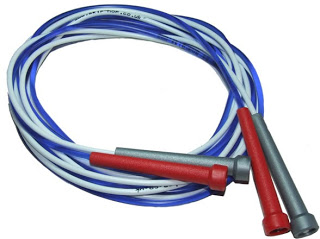 Not having to wake up this morning was a very happy moment
for me. The chance to sleep late, no run scheduled and nothing to do until
another birthday WOD tonight @CrossFitCanuck (Happy Belated Birthday
@jeffortizz). First up though I have to make it through another day and food
wise I have not prepared. With everything that is going on, I feel like I’m
losing track (and the ability) to keep everything in order. The best thing that
can be said is that my food choices, while not great, were at least not my ‘old
normal’ of deep fried fast food evil. Now if I could only get my hips to quit
complaining…
Warm-up ‘A’
400m Run
2 Rounds of
20m Lunges
20m High Knees
20m Butt Kicks
20m Broad Jumps
We started off today with a strength portion to find a 1RM
in the Snatch. Now I know that we normally try and hit the Squat Snatch, but my
best work came on my second last lift (which was a Power Snatch). I hit a PR of
135lbs! Not only a PR, but also the biggest thing I have lifted overhead since
dinosaurs roamed the Earth. The only * on the lift is it was a pure Power
Snatch (I caught the barbell high and then went straight up instead of dropping
under the bar). Oh well. I dropped 5lbs and tried to Squat Snatch and it was
too much for today.
Jeff’s Birthday WOD
20 minute Running Clock
800m Run
20 Hang Power Cleans (@135lbs)
20 Push Jerks (@115lbs)
20 Kettlebell Swings (@70lbs)
20 Pistols (16” Box)
20 Pull-ups (Blue Band)

Spicy, Spicy, Spicy. First off it was a BILLION degrees with
the humidex in the box and I was a hot schweaty mess. We took off on the 800m
Run and @sarahbassels and I ran it 4m10s (which was a really good time for me as
I normally average 2m30s per 400m). Straight to the Power Cleans which were relatively
easy and motored through and then the Push Jerks. My shoulder was really tired
from the Snatch work so I dumped 20lbs to try and make a smart decision. Everything
else went pretty well, for some reason the 70lb Kettlebell felt really light (I
picked it up and thought I had grabbed a 50lb KB by accident) and the Pistols
were awesome. I finished the first part in 15m15s and then it was off to the
dreaded Double Unders. I was so soaked that I’m sure I weighed an extra 10lbs
trying to get into the air, but I did get 44 in! #530Crew hit some big numbers and
we were all spent afterwards.
Cash-out
3xME Pull-ups
3xME Ring Dips
I was pretty shredded after the WOD, but I did attempt to do
a BWOD. It wasn’t pretty. My hips were still tired from my attempt at Hatch and
the long run. I’m still going to keep working on it, but my pace may slow down
as I need to focus on a few things (instead of everything). We’ll see though.
Basically let’s get to the long weekend!
BWOD
Shoulder Stretches
400m Run
Hip Stretches

Hopefully I get the scheduled run in Wednesday…