First off, WHO STEALS A TRUCK TIRE? Like seriously? It takes
a whole lot of effort to steal a 150lb (ish) reject truck tire from outside
@CrossFitCanuck. Let me tell you, there are a whole lot of pissed off Canucks
on the lookout and you better hope we don’t find it or you. Man, what a low
down dirty thing to do. 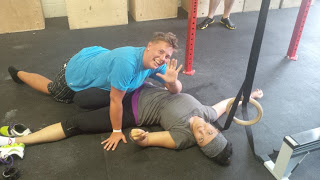 Let’s talk about the hot crispy mess that I was rolling in
to the box tonight. A whole bunch of folks dropped out of tonight’s sessions
because to be honest it looked killer. Now I won’t straight out say cherry
picking, but 15 slots in 3 classes opened up after the WOD was posted. Well in
a reversal of roles @SarahBassels (who was not in for a WOD until she was
talked into it) ended up being the only lady in a class of all guys. It was
going to be Power Cleans all day long for us today.
Warm-up ‘A’
800m Run
10 Beat Swings
20 Squats
We started off with a 12 minute session of trying to find a
1 RM Power Clean. I was having some trouble with the shoulder so I wasn’t sure
how this was going to work out.  The
first few pulls were good, but I was having trouble with form (I was jumping
backwards on the pull).  Sadly I didn’t
hit a new PR, but I got to within 5lbs with a bad wing (successfully hit 195lbs).
I dropped down to 135lb for the next portion which was 5 rounds of 1 minute ME
Power Cleans followed by 1 minute of ME Strict Pull-ups (Blue Band). Holy barn
burner! It was like déjà vu every 2 minutes.
WOD (For Time)
10 Rope Climbs (4 Ground to Standing, 12 Ring Rows)
800m Weighted Run (@95lbs)
2000m Row
Now I know the tone of tonight has been a little erratic,
but I was not a happy camper. Besides not being able to do a serious attempt at
a Rope Climb, I was having uber trouble pulling up from the floor. Jillian
moved me to Ring Rows and they weren’t much better. I got them done and got
outside for the weight Run. More trouble. I couldn’t carry in front rack so I had
to go overhead and bring it down on my back. F@CK ME! Uncomfortable in the
position, but not the weight. I got the first lap in, dumped the bar and my
shoulder exploded. I took some time and tried to focus and then reloaded. Got
the second lap in and moved to the rower. There was a CAP of 20 minutes and I didn’t
have a lot of time to knock out the 2000m. I managed to set a PR on the row
(7m35s), but I finished in 20m56s.
My body is officially unhappy and I had a 5K run on the
schedule after the WOD, but there was no way. I’m going to try and give it a go
tomorrow, but we’ll have to see. There was lots of mobility after the WOD, but
not much else. I have a 40K ride scheduled for Sunday and hopefully a run on
Sunday.
Congrats to @SarahBassels for 2x PR’s on a day she didn’t
even want to WOD!
Beez