@savannahjessie and I on the trail!

If a tree falls in the forest and no one is around, does it make a sound?

Well I’m not sure if it does, but I certainly do (whether anyone is around or not). Geez, no one explained the dangers of Forest Gnomes to me before @SavannahJessie, @gfenton_25, @CADPRO00 and Boys headed up to Horseshoe Valley for some Cross Country Night Skiing.

*Side Note – I have not been cross country skiing since sometime during the period when the A-Team, Knight Rider and Airwolf were popular on TV (first runs, not syndication). It’s been a while. I vividly recall that I enjoyed that experience for the most part although I did not enjoy going downhill and there was one section where we were high up on a riverbank that wasn’t awesome. I couldn’t tell you where this magical location was… 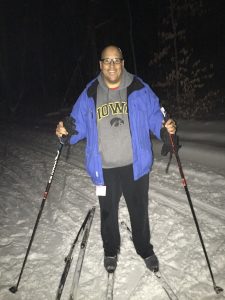 Proof I was upright…

Fast forward to last night. I’ve only been night Skiing/Boarding once and the jury is still out on whether it was my cup of tea. @CADPRO00 suggested this little adventure and I am pretty happy he did because it was my speed (based on limitations at the moment). @SavannahJessie and I had a great time. Except for the Gnomes. They struck twice last night (little b@st@rds). After a slow beginning I really started trucking on the skis and was tooling around fairly well. Our group and become separated and @SavannahJessie and I had stopped for a second when out of nowhere I was suddenly falling in slow motion. If I had been moving I could have understood falling, but I was completely stationary. I searched around for the little jerk, but he had already escaped into the night.

Originally we had planned a nice and easy 3.2KM loop (shown in Green as Trail 1), but the turnaround isn’t clearly marked and we ended up on this lonely INTERMEDIATE trail (in Blue as Trail 2) with a substantial downhill. We both survived and it was really nice to be out in the woods. Just the two of us on this quiet little trail. We stopped to take a picture (which is really hard to do while both wearing skis. One quick selfie and a couple of photos. Easy right? NO! The Gnome came out of nowhere and this time attacked the Lady! One minute she’s standing there chatting and the next, well just look below. 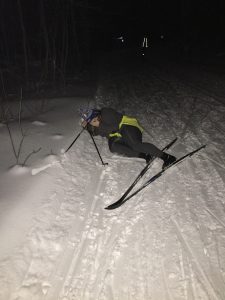 We somehow managed to find everyone again shortly after the hill of death and made it back to the rental office just before they closed down for the night. 6.2KM of night time fun on the trails. My feet were really starting to hurt for the last kilometer so I was a bit of a Grumpy Gus, but it was a bunch of fun!

Switching gears, how’s the February Sit-up Challenge going? Are you on pace? Are you a bit behind? Have you not started yet? Don’t worry you still have time! It’s really cool to see some of the Canuck Lite folks taking part in the challenge and every day we chip a few more off the 3000! Just keep at it. If you missed a day, don’t beat yourself up, just get a few extra tomorrow. I’ve completed 1550 of 3000 (as of yesterday). 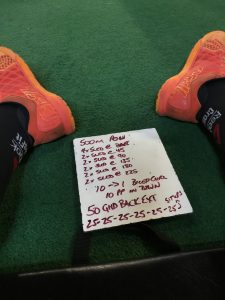 I hope everyone is staying bundled up tight while the snow falls! Take the day off!