Skip to content
All You Can B: Bikes, Barbells and Bacon > CrossFit > Lonely Run With a Crazy Face
February 25, 2017 BigBrnz

Should I feel insulted by this guy??

So what does one do with cranky knees, an inability to squat and a marathon to run in little less than eight months… Obviously drag yourself out of bed before the crack of early, put on the kicks and head out into the misty morning for a run. Oi. It’s been a little while since I was outside running and I definitely came to a conclusion, I AM SLOW. And old (that’s a side note). The first 1KM might have been one of the hardest ever, the knee ached and my cadence was all over the map, but even when I wanted to quit I didn’t. Things seemed to loosen up as I went and besides an irrational fear of skunks this morning, the route was a new one that meandered around the Hill. 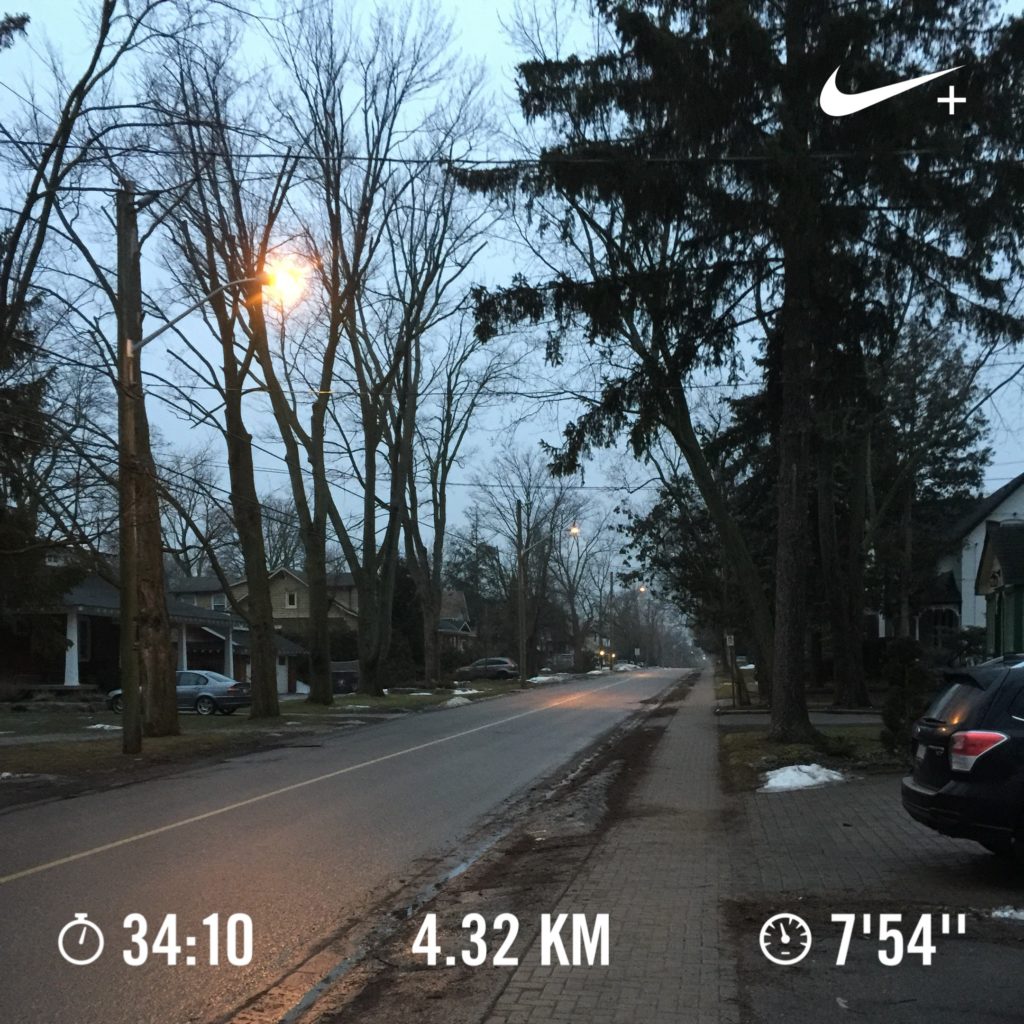 The shmutz from the winter thaw (it is just dirty and depressing), the lonely side streets (and yes they were pretty barren) and a random tree with a random face, making a face. The run was 4.43KM (34m30s) with an average pace of 7m48s/KM. See brutally slow. Still I was out there and burned 500+ calories first thing in the morning to create that calorie deficit and get the old metabolism firing. The interesting thing today was my cadence, as the shoes registered 154SPM average, which is just about where I need to be. It looks like the session with Mr. Angelo (@ajhughes77) will be about lengthening my stride and making my running more efficient.

Running is fun… Sort of. My love hate relationship hasn’t developed into a full blown crush yet, but I’m working on it. Still, with all squats off the table, I’ve been progressing through @Eastbound_Power’s Bench Press program and in weeks three and four, things got serious. I mean like heavy serious. When you open up the plan and start seeing 205lbs and 215lbs on the bench for reps, well it makes you wonder what you were thinking. Then you actually start pushing the plates (and there is something oddly satisfying about using metal plates, I highly recommend giving them a try) and you realize that you are capable. Let’s just say the feeling is awesome.

I did have a couple moments of worry though. I had one morning where the barbell just did not want to follow a smooth path and where during the last rep there was that moment where you were sure it wasn’t going back up, but it worked out. Strangely I had a few Shoulder Press reps that did the same thing (usually the last one) and I really need to dump the bar next time. Form is important (as is the setup) and there is no point putting myself in a bad position. Lesson learned (and some helpful advice delivered by Coach Rob about using the cage).

Finishing up there are two last things I want to touch on and the first is the feeling of confliction that I am feeling, especially as I watch my fellow Canucks complete 17.1. Everyone digging into the 20min Dumbell/Burpee/Box Jump Over combo that Castro programmed is inspiring, but I feel a bit sad that I can’t be there to suffer too. I know that it was the right decision to not participate this year (and that I probably shouldn’t have last year… Thanks a lot knees), but it doesn’t make it any easier. The energy and the support from the Canuck Family is really and amazing thing and is something that is very special. Sadly, the risk of injury to already damaged joints was too great and the Chicago Marathon is the end goal this year. I will be back, that you can count on though.

Before I send you on your way this weekend, how is February’s Sit-up Challenge going? There are only 3 days left to finish off those 3000 Sit-ups. I’m currently sitting at 2600 so I feel pretty good about where I am at, but don’t leave them until the last minute. It’s time to announce March’s Challenge. Are you ready? What do you think it’s going to be? Any ideas? Well, here it is. Drumroll please…

Your goal for the month of March is to collect 1500 calories on the Rower, Air Assault Bike, Spin/Stationary Bike or Treadmill. You can use any combination of equipment you would like as long as you collect the necessary 1500 calories.

Have a great weekend (although it is starting out a little foggy),