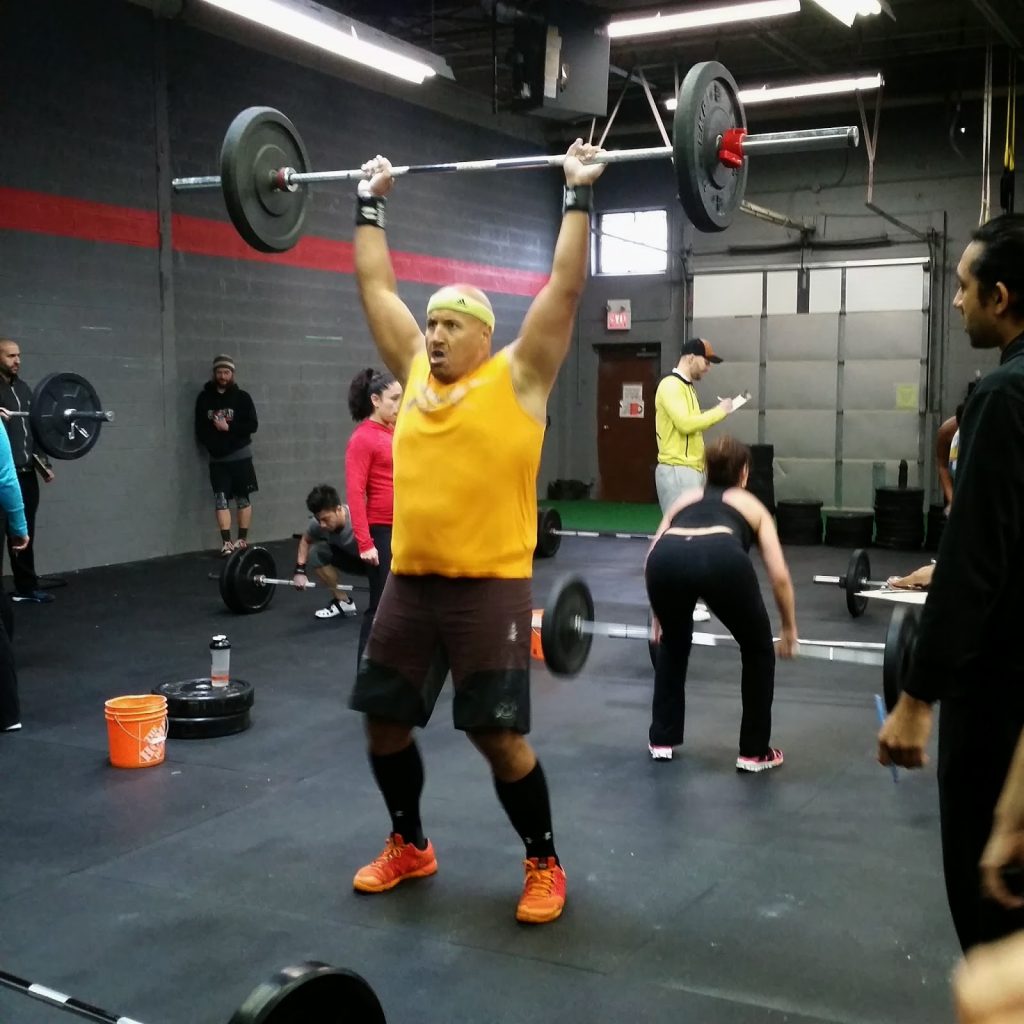 Pushing the Press
Saturday (March 21) – Another year older. That’s not so bad.
People get really worked up about getting old (and honestly, sometimes I do to),
but it’s like the turning of the seasons, we can’t stop it. You have to learn
to make the best of it. This year I’m not celebrating one of those milestone
birthdays, just another year. I’m not upset about that because I’m conflicted
and I’m not sure how I should be feeling. It has been without a doubt the
greatest year ever, but somehow I’ve started to notice that I’ve lost a few
things. Let’s recap, I got engaged to @Savannahjessie, we bought a house, I went
to France, I competed in my first CrossFit Open, took my Level 1, started
learning to Coach, the list keeps going on and on. Recently though, I’ve
noticed that I’ve been slipping. I’m not at the box regularly. My diet has been
within sight of being terrible and while doing the Open 2015, my weight is
creeping skywards and I just haven’t had the air or the fire to do really well.
Now, please don’t look at this like a complaint, it’s just an observation. Something
to see, understand and try to fix. Life is full of little puzzles and you just have
to work on them 1 at a time. Back to trying to solve these…
Warm-up
500m Row
Barbell Warm-up
You’ve heard me complain about Mr. Castro’s setup of the
Open and I see no need to keep doing it, but 15.4 was another of those
movements that I just don’t have in my arsenal yet. I stress yet, because this
year I will get upside down. Until then, the scaled version of 15.4 is
something that I think I will do reasonably well at, 10 Push Press (@95lbs) and
10 Power Cleans (@115lbs). Nothing crazy, just how much can you push and pull
in 8 minutes. I felt pretty good going into this one, until I saw the pain on
the Canuck faces in Heat 1… Maybe I need to re-evaluate this one. What can I shoot
for as an attainable goal? Push Pressess. Do the Push Presses unbroken, that’s
a small goal, shoot for that.
When the timer starts, pick up the bar and go. 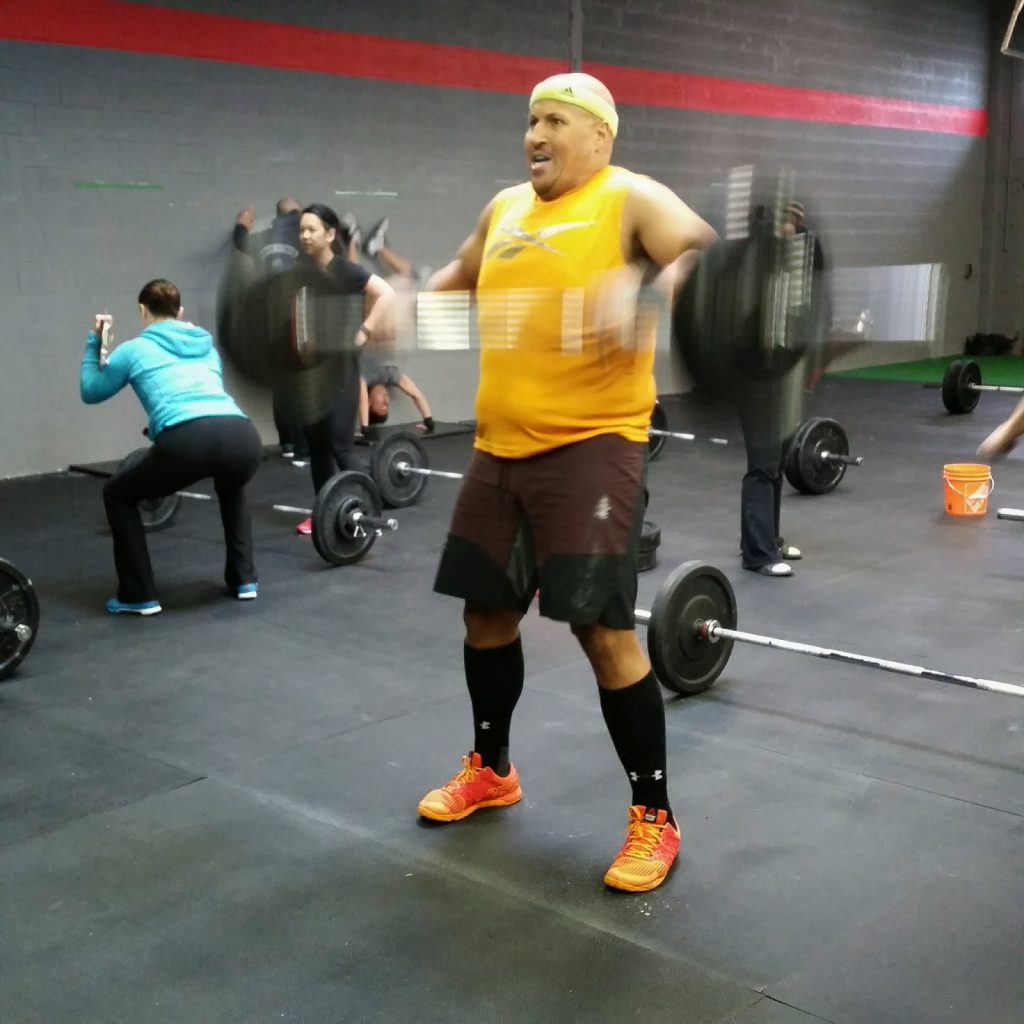 Look how fast the bar is moving…
15.4, 8 minutes of head down. You hear the voices, but you
don’t understand them. They sound like the Teacher from the Peanuts cartoon. Time
seemed to disappear on this one and I started even having trouble seeing things
(somehow I lost a giant piece of chalk behind my water bottle). The world
narrows until it is just you and the bar. I had no idea where I was (round
wise), but I just kept plugging away. As time began to wind down, I broke up my
last round of Push Presses. Great, I won’t even make it to 100 reps. Tick,
tick, tick. Through the Cleans. Wait, I do hear people screaming, pick up the
bar. Get 1 rep. Push Press up, time expires, Beez crashes to the floor
exhausted. Total rep count, 121. Well that’s surprising. 6 full rounds plus 1. 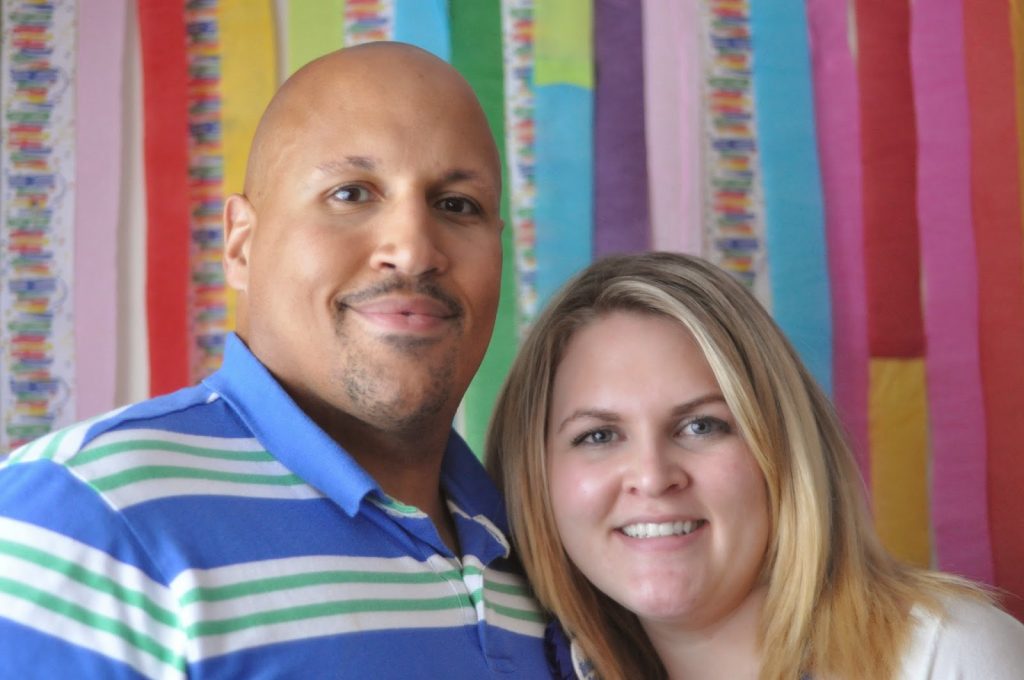 Photobooth Pic with my Lady!
I know how I felt laying there in a heap and have to give a
shout out to Tavia and @SarahBassels. Both of these ladies are competing in the
Open while pregnant (Tavia, just about ready to burst) and they just manage to
keep going. Truth be told, I only beat Tav by 1 rep which should tell you how amazing
they are. The Open is almost finished for 2015, which is both a happy and sad
thing. There was no time to rest though as we had a birthday party to attend.
This year I’m sharing the party with Poppa C (who turned 80) and the Willow
(who turned 2 in February). Thanks to @SavannahJessie, Momma C, Susan and
Naveen for throwing a great party.
Beez