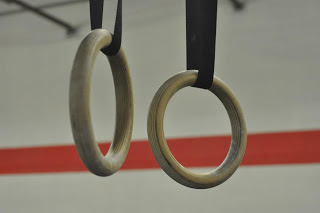 I had to bail on a scheduled workout last night (sorry
Tavia), but I did not react will to an adjustment I received last night.  The Dr’s were having trouble moving my back
and tried a new technique.  We won’t be
using it again, I felt absolutely terrible for the remainder of the evening and
most of today. After a great dinner with Spanky, I came home and went straight
to bed. 8hrs later I awoke with a BLINDING headache and a full on issues in my
back. Spoke to my boss, stayed home and promptly attempted to sleep it off with
another 5hrs of sleep.  I felt better,
went to get fruits and veggies and then went to @CrossFitCanuck for the weigh-in
(End of the 30 Day Challenge).
So the final totals (and before you get excited, I DID NOT
break the barrier), was a weight of 304lbs and a body fat percentage of 22%.  That makes for a loss of 19lbs and 10% body
fat in 30 days (woohoo!). It’s not just the weight (or body fat), but also the
inches lost and total body wellness I’ve been feeling.
Warm-up
400m Row
2 Rounds of
5 Good Mornings
10 PVC Front Squat
10 PVC Back Squats
10 Push-ups
Now I went to CFC early to get measured and roll out in
preparation for the 530p class, but because I was there, Tavia suggested
joining the 430p class. It was different but like all CFC classes it was full
of good people! Our strength training today was the Front Squat with a goal of
setting a new PR. 2×5 @75% (170lbs), 2×3 @80% (180lbs), 3×2 @90% (205lbs)  and finally 2×1 @95% (215lbs). We had time
left so I kept working towards a new PR and managed a new record of 245lbs! We
followed up the Front Squat work with2 ME Back Squats at whatever our final FS
weight was.  I managed 10 reps (had some
trouble with balance in the first set).
WOD (15 minute CAP)
1600m Run
50 Pistols (on a bench)
30 Hang Cleans (@135lbs)
Clearly Tavia is also on board with @DefconRX’s outlook of
running before May (boo).  Again, I did
not hate it.  I ran 1500 of the 1600
meters at a good pace and felt pretty decent. I was shredded though by the time
it came to the Pistols. Made it to the Hang Cleans (got 4), but I used up a lot of the
CAP on the run (about 9 minutes) and I am very ok with that.  I would have loved to get a few more reps,
but those are the breaks some times.
Cash-out
3x ME Chest to Bar (Blue Band)
Now I managed 4, 5 and 5 reps of the Chest to Bar. Overall
my body felt pretty good, but I did have some tightness in the ribs and mid
back that I had worked on.   I completed
homework on the GHD for 3×20 and then a whole bunch of stretching There were some Pull-up attempts and even some muscle work on the Rings. I even
managed to cheer on some of the folks in the 530p and 630p classes.
Then back to the Casa to make chili and spaghetti squash
pasta.  I have been off track for a
couple of days and it’s time to get my act together.
Beez

One Thought to “Even When You Don’t Want Too”