Skip to content
All You Can B: Bikes, Barbells and Bacon > CrossFit > Practical Snatches
January 10, 2013February 19, 2019 BigBrnz
After Monday’s WOD, my back was still a little bit gooey
(that is to say sore), but not bad enough to stop me from going to
@CrossFitCanuck tonight.  It was a night
with a lot of really strong work and deep down I know that my body has more to
give.  The hard part is just pushing
through the wall.  I can feel my body
getting stronger every single day and I don’t want this to stop. The side effect
is that my weight isn’t going down; it’s going up (now I’m not panicked because
all the weight that has been added is all muscle).  Combined with trying to eat paleo, hopefully
I will get to see results on the scale (I know the scale doesn’t matter Tavia,
but there is a wall there too… 300).
Warm-up
250m Sprint Row
50 Jumping Jacks
20 Pushups
10 Squats
2 minutes Skipping
Holy flashback Batman, I haven’t done jumping jacks since I
was playing football in the 90’s. It was a full house tonight but it was
awesome (as always) that everyone always finds room and equipment. We did a
whole bunch of strength training tonight and I have to say I was worried.  I was paired up with Jeremy, aka ‘The Tank’,
the man who holds the Back Squat record for the box at 405lbs (Canuck had to
order more weights).  First we worked on
behind the neck Snatch Press and I was struggling with it until Jeremy
suggested I close my grip a little.
After that it was 3 rounds of 3 reps @105lbs. We moved to Good Mornings
next and the big man and I went toe to toe all the way and finished 3 rounds
maxing out at 165lbs.
Buy-in
CrossFit Games Open 12.2 (10 minutes AMRAP)
30 Snatches @75lbs (I was at 45lbs)
30 Snatches @135lbs (I was at 55lbs)
30 Snatches @165lbs (I was at 75lbs)
30 Snatches @210lbs (never got there)
It was a pretty crazy start to this session, but everyone
worked really hard, especially Tavia (who was working out with us instead of
teaching tonight), @SarahBassels and @Wardy_ (who really needs to think about
wearing a cup when she comes to work out).
WOD 8 minutes AMRAP
10 Behind the Neck Push Press (@75lbs)
20 Kettlebell Swings (@45lbs)
90 Skips
8 minutes doesn’t sound like a lot of time, but it felt like
FOREVER. I got through 2 full rounds of this WOD and finished an additional 10
Push Presses (the bar hit the ground as Darryl yelled TIME!).
I stretched out shoulders and hips, but I stayed off the GHD
machine (my back still isn’t ready to get back on there yet). After that it was
off to the ROPE. Please notice that the ROPE will now be known as the Rope. My
time hanging from the rope has increased from 0 to over 6 seconds. I even hung
OFF THE GROUND (hanging with feet locked into the Rope)!! Ok, it was 6 inches off the ground, but hey, small victories.
Before I wrap up tonight, some housekeeping notes as we
quickly glance back at 2012. As you can see below, 2012 was a very busy year
for me and I am pretty excited about the fact I had ridden over 1,258KMs. I
also clocked in a 133 workouts.  As I
look forward to 2013, Tavia has suggested some paleo reading for me and
combined with CrossFit, I see big things ahead. 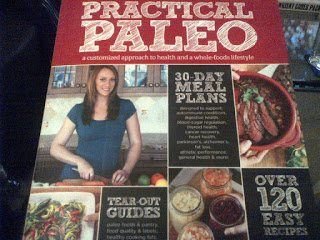