Skip to content
All You Can B: Bikes, Barbells and Bacon > Uncategorized > Sapporo, Crowns and Turkey
November 23, 2012February 5, 2017 BigBrnz
Happy Thanksgiving!!
Now you must be looking at the name of this posting and be
thinking WTF do these things have in common and how are you (that is to say me)
going to tie them together?  Well, being
a master of the long winded story that may or may not lead somewhere I ask you
to sit back and enjoy. It will be a gripping story of pain, loss, unexpected
victory and CrossFit.
So let’s start with the pain and loss section.  I made it home after a tough CrossFit section
on Monday and while eating dinner there was an ominous ‘CRACK’ from my teeth
(the pain). Greeeaaaatttt. I shrugged it off, chewed on the other side and decided
to deal with it in the morning. While biting into a muffin the following day I knew
I was in trouble.  I called Dr. Hyland
and after being examined Thursday morning I got the news that I would be the
proud owner of a new crown (the loss, financially).  I spent the rest of the day in discomfort and
even thought about bailing on my CrossFit class.
Queue the Team! Guilt and encouragement (in almost equal
parts from Erin, @CADPRO00 and @Keilshammer) and I was resolved to make
it.  On a side note, I’m pretty sure
@CADPRO00 deliberately got in an accident to avoid working out (just kidding,
he was ok, but started to stiffen up.
Decided to visit the Dr. instead).
I got to class early and had a great chat with Tavia
regarding nutrition and dieting and though I’m not sure what’s right for me, I will
be combining some elements to see if I can find something that works.  We hit the warm-up and were underway:
500m Row
10 Good Mornings
10 Fire Hydrants
10 Ab Rollers
I really think that I may have been built for rowing,
because it is seriously becoming my new favorite activity. Once complete we
started work on Hang Snatch Pulls (which I’m not good at) and Deadlifts (which I’m
getting better at). I just can’t seem to let my body drop under the bar, but
the weakness has been identified and I will work on it.  As we worked on the Deadlift, I did manage to
smash my old personal best (PB) and make it up to 195lbs.  Tavia and I agree I could have gone higher,
but we were pressed for time.  Here’s
where the workout killed me:
3 Rounds
30 Front Squats
15 T2B (Toes to Bar… Krees as high as possible for me)
15 Box Jumps (I did step overs)
I finished (utterly spent) in 10m46s with 65lbs on the
bar.  It was crazy hard but sooooo much
fun (except for the T2B part which I could have lived without).
I had to leave right after class because I was meeting M for
a drink at Queen and Bathurst (Czehoski’s) at 7pm. Note to self, getting from
Scarborough to Downtown is like mortal combat driving, leave more time. This is
where Sapporo comes in (and I only had one beer).  I even ate well (considering it was late), I had
a burger (which I only ate half) and salad.
Boxed the fries and the other half for lunch. We had visited Czehoski’s as
a group a few weeks ago and I had entered a contest for something.  Little did I know, that the something was a
four foot tall MP3 sound dock. Awesomeness. 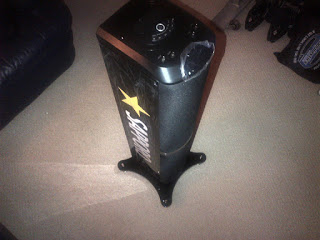 Now the only thing not covered is the Turkey.  Well sadly I didn’t get any and I’m a little
bent about it.
Beez