Well I missed you guys too.
It has been a long time since that first day of October when last we
talked (well, I wrote, you read and I got sweaty).  I missed the chance to say “Happy
Thanksgiving” and to hope that my pants had the structural integrity to contain
the turkey feast Momma C was going to lay forth.  Two weeks since I’ve done anything resembling
working out (most of that due to the back injury and what I will tell you about
in a bit) and a long, long time since I made promises like the one I will make
(publicly) today.

So just to bring you up to speed, I headed home for the long
weekend for family, food and fun with the goal of ‘getting serious’ with the
training on the Monday.  Dinner was
Saturday and there was a reunion for all the old boys from the bar on Sunday night.  I managed to be very reasonable with the food
intake on Saturday (although maybe heavy handed with the rum) and Sunday was a
good night seeing everyone until I broke down and had McDonald’s (boo).  I drove home on Monday, but nothing exciting
happened workout wise, instead I had a nap and relaxed.  Tuesday, nothing.
Wednesday, no more slacking. Alarm goes off, I’m out of bed
in a flash and rearing to go. Scarf some breakfast, get changed and am just
grabbing my keys when it happens.  I get
violently ill. Now I haven’t been sick like this is at least a decade and I would
spend the next two plus days confined to the condo.  I lost twelve pounds (and yes you read that
right, 12. Or XII if you prefer the Rocky notation).  Now while weight loss is generally a thing to
cheer about, I would have rather kept the weight (and I will spare the details
of how). This illness (whatever it was because I’m not convinced it was flu or
anything like that), took it out of me.
This morning though, I vowed that it was time to get tough
and get moving.  Alarm goes off. I lay
there. Snooze. Alarm. Snooze. Alarm. Snooze.
“GET UP” I screamed at myself and we were finally underway.  Now I’m planning to start hitting Goodlife
again, but today was going to be Dans le Condo and it was going to be 10K
Training. The session worked out to 40 minutes and I averaged a pace of 8:39
min/km and burned 570 calories. It was tough sledding because of the long time
off and the lack of activity over the last two weeks, but I ran all the
prescribed times for the full durations (YAY!).
Now I spoke about promises and buckle up because they are
coming hot and heavy.  I’m going to be an
Uncle in February and even though this will sound silly to some, I want to make
a good impression. So the task I have laid down for myself, is to get to my ‘ideal’
weight of 265lbs.  That works out to
50lbs in a little less than four months (tight, but not impossible).  The other bombshell is that I have been
inspired by Mr. Collin Ng and his completion of his first half marathon.  I want to do one.  Not next week or anything crazy, but before
my 40th birthday (March 2016 for the scoring at home). 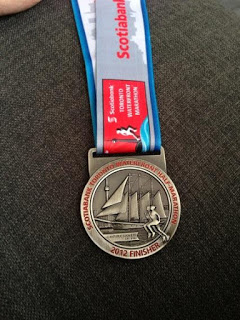 (I Want One)
There, done.  Lots to
take in first thing on a Monday, but we’ll be regular from here on.