Skip to content
All You Can B: Bikes, Barbells and Bacon > Exercise > Stupid Universe and Iowa…
October 3, 2012February 19, 2019 BigBrnz
Wowza.  The universe
seems to be a little irritated with me and the large amount of fun that I had
on the weekend.  Since then I’ve dealt
with stupid drivers, ridiculous traffic, malfunctioning equipment and some
jerkface parking in my spot (now two $30 tickets and him getting his car towed
is going a long way to making me feel better). I’ve had trouble getting back into
the Eastern Time Zone and getting myself out of bed, but I am really motivated now.
I have started tracking my food intake and promise that I will be posting more.
So before we get into activity, here’s a recap on Iowa.  @michDoyl24, @3DinTO and I packed into the
car and headed out on the highway on the long road to Iowa. Twelve solid hours
of highway miles later (@3DinTO was impressive as lone driver) and we rolled
into Walker, Iowa.   Crashed for a couple hours and then off to
Scheels, Chick-Fil-A (great chicken sandwich) and Target (and no, I did not go
broke at Scheels).  We hit some local
bars and called it a night early.  430a
wake-up call to be in the parking lot for 6a tailgating.  A couple of drinks, a great breakfast and
then off to Kinnick for my FIRST NCAA DIVISION ONE FOOTBALL GAME (excited
much?). Sleep and then Twelve hours back… 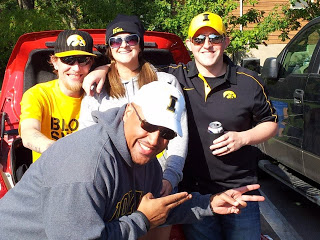 Monday was a recovery day (sleep wise) and Tuesday night I was
off to fix some computers.  I knew I wasn’t
going to workout so instead of driving to my repair I did the healthy thing… I
walked.  Thanks to Mother Nature’s
weather I logged a respectable 6kms (roundtrip) in about 53 minutes.  That works out to a very nice sub nine minute
KM.  No heart rate info because it was
kind of impromptu, but it’s all about just getting out at this point.  I will be hitting the gym (hopefully once
this week and then more regularly) since the bikes are put away.
Beez