Skip to content
All You Can B: Bikes, Barbells and Bacon > Uncategorized > Too Much of a Great Thing
February 10, 2012February 5, 2017 BigBrnz
Last night was a party night, we hit the Village
(specifically Rusty’s) for some alcohol fueled fun.  It was a great night of fun, but it was a
long night.  The plan remained the same
for today, get up early and hit the slopes for first snow and shred the hill.  Problem is that when the alarm went off this
morning, it was a little bit harder getting out of bed after a long day of beer
drinking.
It was tough sledding getting out and South was my
destination again.  I got on the lift at
9a and headed up to the Waterfall.  The
trouble is that after yesterday’s boarding (more runs then all of last year) my
legs still weren’t back.  I started having
all kinds of trouble; my legs wouldn’t do what my brain was telling them.
I started wiping out in places that I normally had under
control, but they were now impassable. I couldn’t go from heel-side to toe-side
and getting speed was all over the map.
Too much speed and no control in one section, not enough speed and no
control in another. Let’s just say that generally speaking I was just having
difficulties.
Met up with Denis and we had a run, but more issues.
I get back to the top and I have a loose binding again.  Not the one that comes loose every freaking
day, no, now it’s the other one. I just can’t seem to win here and let me tell
you, Flow will be getting an email from this unhappy customer. 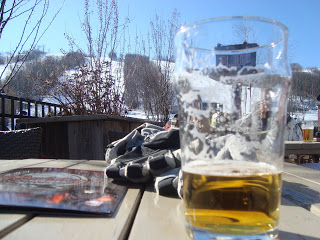 No calling ‘Last Run’, but this was it.  No sense getting injured. Back on the bike
once I get back to Toronto.
Beez

One Thought to “Too Much of a Great Thing”