So I understand that this posting is a little late and yes, there is a really good reason for it.  So Tuesday was Blue Ram baseball night at a mosquito infested Brickyard Field.  Those bugs brought knives and forks to the game and if you stopped for a second, the swarm was on you.  So we were playing another new team and we were missing two key members of our squad so we had to call up a reserve.

The first inning was a tough one (but it could have been worse), when after they had scored first we missed getting the runner at home, but I turned and gunned out the baserunner going second to third.  We kept it respectable, but in true Blue Ram fashion we killed ourselves out of the gate.  Runners trying to turn singles into doubles, hitters trying to mash on every pitch and just not being patient.

We got down, but in the sixth we started fighting back into the game. This is where the night went horribly wrong. We’ve just scored a pair to get close (I’m the third base coach) and we have a runner coming to 3B and there is going to be a play.  I check the runner and look to find the throw to let him know if he has to get dirty.  As I look up, ball coming at me (eight feet off the bag) and not the third baseman.  It’s ten feet away when I see it, swat at it and try and jenga myself out of the way.
THWAP. 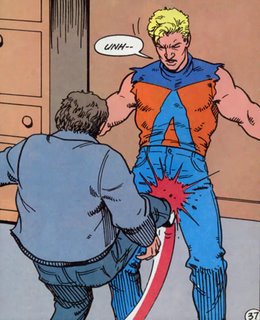 Now using the picture as a guide (except it’s me, not the superhero and it’s a softball not a foot) you get the general idea of where the ball impacted on yours truly. Ladies, not sure how to describe the feeling.  Gents, well, enough said.  It hurt.  A LOT.  There was nothing I could do to get out of the way and in all my years of playing sports I’ve never worn a cup (although buying one, has moved to the tip top of my to do list).  I spent some time on the ground and then breathing hard, was helped to the bench.
You would think the saga ended there, but 10 seconds later, I’m due up to bat.  Really?  Gingerlly I make my way to the plate, hammer the first pitch for a single and waddle to the bag.  Courtesy Runner! With that, I realized my night was over.  Get back to the bench (trying very hard not to vomit on myself or anybody else) got changed and headed home.

1-for-2 with a run scored, an RBI and a bruise in a place I generally don’t display in public.