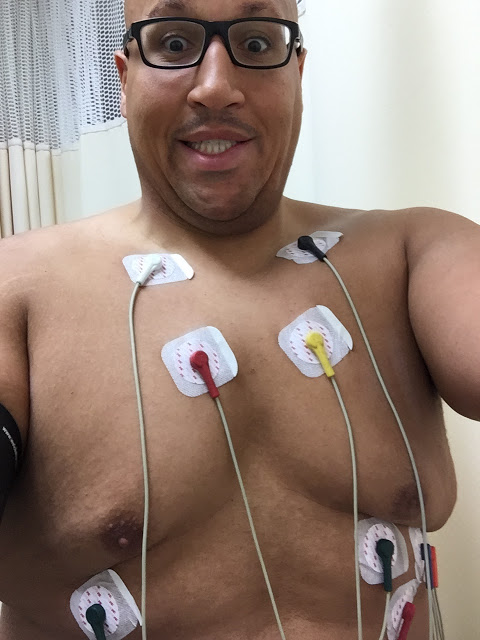 All hooked up… Tech looked at me funny when I took this picture…
Wednesday (October 28) – After my little
spin to the emergency room for chest pains I went in to see my family doctor.
Now I hate going to both hospitals and doctors so you can imagine how freaked
out I was by this whole episode. Still, it’s happened and now the task is to
try and figure out why. After consultation, Dr. Low sent me to get a Cardiac
Stress Test to see if we could get to the bottom of the mystery.

Basically the test boiled down to me
strapped to a million sensors on a treadmill. OK, that doesn’t sound too bad. Well
except my tech had apparently never met anyone my size who was in shape.
Talk about a nervous Nancy. He thought I was going to keel over before the test
even started. No running! You have to hold the handrails! If you feel any
shortness of breath, discomfort or anything hit the big red EMERGENCY STOP.
No running. Got it. Hold the hand rails? It’s
a treadmill not a bucking bronco, but fine. Your house (not literally), your
rules. The test kicks off and the treadmill immediately goes to a slope of 25
degrees… Seriously? We aren’t even going to warm up to it? Fine. I get to level
4 and he starts getting panicky. I’m still plugging away, but I’m at the point
where I’m going to need to start running. He seemed to take this as a sign that
my collapse was eminent. We continue for a few more minutes and he halts the
test. 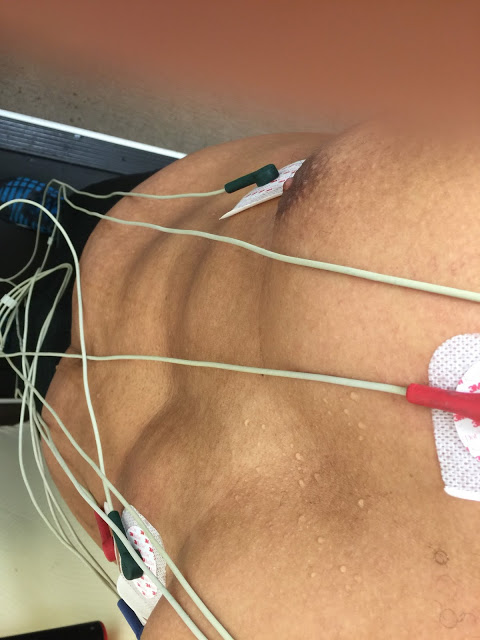 Dripping sweat… Almost looks like I have abs…
Based on what I saw and his answers, my
heart looked strong and steady. It didn’t really pickup any type of funky rhythms
and my blood pressure while increasing as the test went on stayed at a
reasonable rate.  I thanked him and went
on my way. The cardiologist was scheduled to look at the results the following
day and send the results to my doctor.
***UPDATE – I called in after not hearing
anything for 5 days and was told that everything looked normal and if it had
been something, they would have contacted me already. So, we still don’t know
what it was, but it isn’t anything wrong with the ol’ ticker. HUGE SIGH OF
RELIEF. I will chalk this one up to indigestion, a panic attack or maybe the
effect of the Moon’s gravitational pull. Nothing to worry about.
Beez