Skip to content
All You Can B: Bikes, Barbells and Bacon > Exercise > The Race That Wasn’t and The Run That Was
September 8, 2013February 18, 2019 BigBrnz

Wasaga Race Weekend and guess what, it’s raining again. Last
year we barely survived the flood, monsoon type rain and chili conditions and
this year was looking like more of the same. We woke up to rain beating down
and very gloomy conditions. Team Awesome waited until the last minute to make a
go or no go decision on the race and ultimately we said nay. @keilshammer ended
up deciding to go (and in the end the weather ended up clearing, but that is
neither here nor there) and he ended up with a great time. My main reason for
voting to not race was the condition of the roads. 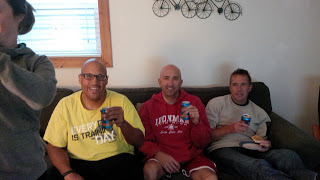 Don’t let the picture of Team Awesome fool you though, we
didn’t sit on the couch drinking the day away. @Ed_markwards, @C_R_Morton and I
got suited up and headed out for a run in the rain. The original plan was to go
for between a 5KM and 7KM light tempo run just to say that we had done
something. We bother you might ask? Without having to go to the race site,
register, get transition setup, stand outside for multiple hours waiting to
compete (while trying to stay warm and loose), heading out from Casa de Morton
was a no brainer.  While on the run,
something very special happened…
I COMPLETED MY FIRST 10KM RUN!!!!!
That’s right, someone who is still learning to embrace
running, went nonstop for 1h13m in crappy conditions covering 10.14KM.  We got to 7KM and decided to stretch it a bit
farther and then when we got to 8.8KM and well, that’s almost 10.  We kept going and I was very happy that we
did. My heart rate info was all over the map, but that’s because I think my
strap slid around. The boys decided it would reverse triathlon day. We got back
and hopped on the bikes for a quick easy jaunt down Shore Lane. Little to no
traffic, but still greasy roads. Covered another 10.15KM in 27 minutes.
Today was also the start of the Whole Life Challenge. I knew
that I would be getting a 0 for Nutrition, but I covered everything (except
water) else. We’ll see how the next 54 go…
Beez