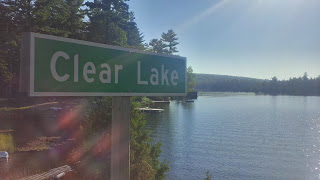 Welcome to Novar, Ontario! We are north of Huntsville for a
cottage weekend with Diamond Dawgs ball team for some eating, some drinking and
some Beerbie. Now to offset (ok, maybe not offset, but make me feel better
about drinking a copious amount of Sleeman Clear 2.0), I packed the Beast so
that @cjwagstaff and I could take a tour around Novar. So the plan was to wake
up early on Saturday morning and find the time for a quick 20km ride. The
agreed upon departure time was 7am, needless to say we were a bit late getting
out the door, but we made it.

@cjwagstaff was the guide today so he choose the route (and
chose well because the other route was apparently the breeding ground for every
mosquito north of Gravenhurst). Now I won’t say that Novar is as mountainous as
Wine Country, but there were some SUBSTANTIAL uphill climbs. Out on the road
and out of direct sunlight it was freezing. Not, just a little bit cold,
freezing. Once that wind got whistling the fingers got really, really cold.
Overall the ride went really well. I didn’t eat breakfast (2
cookies does not make good fuel for a ride) so I was starting to bonk a little
on the way back, but we stopped a couple of times for pictures so that helped. The
uphill sections were attacked very hard and I managed to have my gearing spot
on.  I never had to get out of the saddle
and my legs felt really strong (but I did get winded after a couple big
climbs). 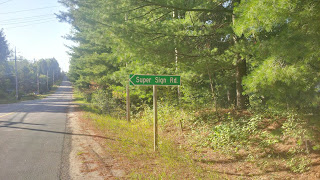 Note the GIANT hill up the road

We covered 20.01KM in 56m27s at an average speed of
21.3KM/h. I don’t know if you noticed, but the average speed on the Beast since
I started @CrossFitCanuck has risen to over 21KM/h on both rides this year (an
increase of 3KM/h+). There was a max speed of 54.9KM/h and I had an average
heart rate of 131BPM, maxing at 169 BPM. All in all we had over 60m of climbing
on this ride and while the hills weren’t long, they were steep. It explains why
I burned off 1,413 calories before 9am. 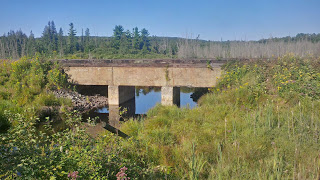 I’m still trying to get my running in order (and I had some
good guidance from my virtual training partner Jess) so hopefully this week I can
get it turned around. Lots of CrossFit this week and At World’s End with
@hoodieruns and @Ed_Markwards this weekend (Sooooo Excited!!).
Beez