In an odd twist, I thought I was getting the stat Victoria
Day off to lounge on the dock and catch some rays (and some zzz’s). That was
not to be however as my running partner @Wardy_ remembered that we had set a
running date and she would not take ‘no’ for an answer. Unlike most runners
though, it actually does take me a bit of time to get ready to run. It’s not
like I’m stalling, but I had to get my contacts in, get my running gear on and
then allow my Garmin to find me. The extra 10 minutes did try on @Wardy_’s
patience and soon thereafter we were on the road back to the Torrance Community
Centre (which is home base for runs and most of our rides).

Based on the fact that we got started a little later than we
originally planned, I may have been a tad overdressed (wearing a long sleeved
Adidas running top). I was warm right out of the gate, but because we were
doing a nice LSR (Long Slow Run) pace it was manageable.  It was a good thing @Keilshammer and I didn’t
try to add this as a Brick after our ride. With the hills I was facing, I’m not
confident I would have made it.
Overall the run was really good (and it was my first time
running with @Wardy_), our pace was steady and it was a nice chat on a road
that wasn’t too crazy busy. Aside from one @sshat that buzzed us, all the
drivers gave us lots of space.  We
finished a 4.15KM run in 31m15s and I felt good enough that in true Beez
fashion I closed out with a 50m sprint to end it.  Our average pace was 7m32s per Km and I had a
max in the area of 2m30s in the last sprint portion.  Heart rate was 141BPM average (which is about
right where I need it to be) and I maxed at 179BPM (guessing in the sprint
because I haven’t uploaded to Garmin Connect yet to analyze).
Not sure when you will hear from me next because I’m headed
to Grove City PA to refresh my wardrobe.
Once I get back it’s off to the CrossFit Canada East Regionals for Fri –
Sun. Back to reality after that, but until then I’m kicking back dockside! 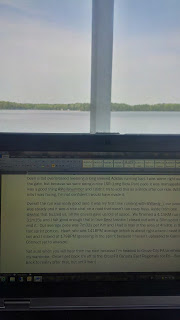