Skip to content
All You Can B: Bikes, Barbells and Bacon > Exercise > BFL and Uncle Beez
December 1, 2012February 18, 2019 BigBrnz
Well today was game one for me playing BFL football this season
(they’ve been playing since September) and based on the weather I wasn’t sure I
was going to make it.  The roads between
Hamilton and Oakville were supposed to be awful. When I finally got on the road
it was clean and dry.  That was not the
case the closer I got to my destination.
It was like Mother Nature decided it was going to snow and freeze for
50KM and that would be it.  In Brantford
it was a nice early winter day and I was interested to see how the body would
perform with three plus weeks of CrossFit.
Right out of the gate, I felt strong and fast.  If you read my last BFL related post, I couldn’t
throw, was having trouble catching and was gassed for most of the day.  Just about everything I threw today was a
nice tight spiral with speed and distance.
I was running really well (still not fast though) and while there were
one or two times I needed a second to breathe deep, I was golden.
For a first game I had a pretty great day at the
office.  I threw two touchdowns and ran
for caught three more. One of those catches was a nice bobbling catch along the
goal line and another that involved a nice out, beating the corner and racing
into the endzone (sorry Rawd).  It may
not sound like much, but I don’t usually race anyone to the endzone. I also
made a hustle play to try and catch Cathy.
She had too much of a head start, but I made her run the whole way.
After a quick after BFL beer, I jetted to visit my Sister
and Naveen (I didn’t have time to stop and visit the Little Redhead from
Brantford).  Put together a crib for my
soon to be arriving niece hung so picture in the nursery and put the snow tires
on her mode of transport.  After all
that, I was absolutely spent (and I didn’t finish the whole list). 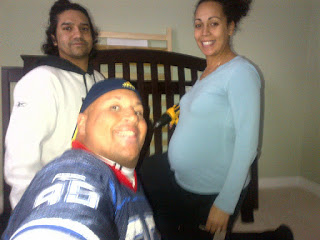 Quick note on BFL. Every time I play my ankle jams at some
point and it takes an adjustment to get it working again.  I thought that with all the work I had been
doing, I was going to be ok.  Of course
the second LAST play of the game it happens again. Not an ideal situation, but
it lasted longer than ever before.
Hopefully with a little more CrossFit I won’t have to worry about it
anymore.
Beez