Skip to content
All You Can B: Bikes, Barbells and Bacon > Uncategorized > Aftermath and Fastness
September 14, 2012February 5, 2017 BigBrnz
Well it has been a few days since Wasaga and somewhat
according to plan you haven’t heard from me.
I said in the last post I was going to take a few days off to recover
(let’s be honest, there aren’t many Saturday’s where I bike 20K and RUN 7.5K
before 11a), but everything has not gone as planned.
Starting Monday morning I was starting to come out of the ‘runner’s
high’ glow cast by Wasaga and dimmed slightly by the 60mm of rain that the area
got Saturday.  One thing was painfully
obvious, my left hamstring was not happy about running and being cold, almost
simultaneously and two I had a couple minor aches and pains that were all
activity related.  That’s when the wheels
came off. I woke up Wednesday morning with a crushing headache and full body
ache and when that had abated on Thursday, my back was in spasm so bad I had
trouble driving.
This is where it gets complicated.  On Monday I received a Nike+ Fuelband
(something I’ve been trying to get since its release in February) and have been
experimenting with it.  The beauty of the
device and the Nike+ Fuel Points you earn, is it provides motivation to get up
and get moving.  I got home from work and
due to scheduling, the walk with the Doyls had to be rescheduled. With dinner
in the books and a back that wasn’t going to let me spin or run, I had to find
some activity to get those Points to put me over the edge.
Shoes on, iPod going and out the door.  I wouldn’t be fast, but I would be out there
at least. It would be better than nothing. I headed north of Sheppard and tried
to keep a good pace going while I got the blood pumping. I was out for 1h02m
and covered 5.92K.  Nothing special, but its
662 calories that I won’t have to deal with again and as always no heart rate
monitor.
As I close this short post for tonight (Bears v Packers are
on), I leave you with this picture from Wasaga (I look really fast) and the
hope that we will chat again tomorrow. 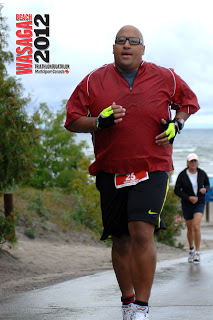 One Thought to “Aftermath and Fastness”