Skip to content
All You Can B: Bikes, Barbells and Bacon > Uncategorized > Who Says a Commute Needs To Be Boring
July 25, 2012February 5, 2017 BigBrnz

I know that reading about a day to day commute is not an
exciting thing, but let’s be honest when the goal is losing this much weight,
it can’t always be sailing an America’s Cup boat of the coast of St. Maarten.  It is the slow and steady day to day work that
will in the end help me reach my goal.
Now that’s not to say that today’s ride was boring.  Far from it in fact.  Apparently I have become a motivator of kinds
at work and today @CADPRO00 made his first commute in (I’m so proud… *sniff).
There are also a couple of other folks who are going to start riding next week.

YAY ME!!
We set off this morning right on schedule and the ride was
outstanding.  The weather was perfect and
given the fact @CADPRO00 was riding a mountain bike (albeit with new Bontrager
Road Warrior slicks) and my legs weren’t feeling awesome, we didn’t cruise at
my normal speeds. Now that doesn’t mean we were dogging it, we were 2 minutes
slower than normal.  Not too shabby
considering he had to work way harder than I did.  It’s a great feeling to arrive at work and
already to have accomplished something (and the body buzz you get from the
workout is amazing).
Now the afternoon ride is where the drama started.  Weather and traffic wise, the ride was
fantastic and we were making good time right until we crossed under the
DVP.  My cleats have been looking a
little ragged due to the fact I’m a big dude and they aren’t designed for some
of the terrain they have been dealing with.
I know I will have to replace them before Wasaga, but for $40 I’m trying
to milk this set as long as possible. Somehow while travelling 40+km/h my right
cleat released from the clip as I was pulling up and my foot/shoe bounced right
into the bladed spokes of my rear wheel. Not Awesome.  Considering how hard I hit and the damage to
the shoe, I was just happy I didn’t break a spoke or damage the wheel.  See the picture below and notice the ¾ inch
slice in the sole. It’s nice to know I can have a total blowout and not dump the bike. 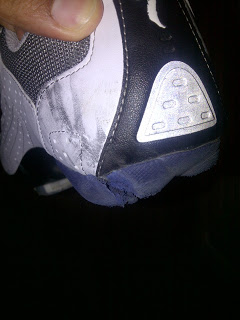 The stats for my daily commute are pretty consistent, but
they do vary depending on the lines I take while riding.  I clocked the ride at 1h31m47s round trip and
burned 2,162 calories! It’s the calorie number that is most interesting, because
nutritionists say that to lose 2lbs per week you have to be negative 500
calories per day.  My heart rate is
usually pretty constant (except for those crazy hill climbs), averaging 153BPM
and maxing out at 179BPM.
Given that Thursday looks like rain, I will only get one
more ride to work in before heading north.
I’m also shooting to start running in preparation for the Duathlon.  Now to be frank, I believe people are born to
do certain things.  Lance Armstrong was
born to ride a bicycle.  I was not
designed to run.  Simple truth. I can run
if needed, but it isn’t my favorite thing to do.  The fact I survived last year’s race was
mainly due to the pacing @Leslie_Morton gave me.  Since she will be in Jolly Ol’ England, I figured
I better figure it out.
Get out there and do something,
Beez

One Thought to “Who Says a Commute Needs To Be Boring”