Sometimes you just have to WOD wherever you find
yourself.  I was originally scheduled
@CrossFitCanuck tonight, but as I try and muster the energy to type this post
you’ve probably figured out I’m not there (well, the Canucks will know, the rest
of you will have to take my word for it). What was I doing? Funny you should
ask on this random Wednesday in the middle of July with a temperature in the
mid-40’s with the humidex. Due to a random act of Soccer injury weirdness,
@phillyk007 was seriously injured and spent some time locked away in ICU purgatory.
He and his lovely wife Mel had bought a new house (prior to the injury) and
were scheduled to move in, you guessed it, today.

Le Barry, BC and I had an ‘offsite meeting’ today (which in
business speak means we loaded up and drove to Brampton to help them move).
@phillyk007 isn’t allowed to lift ANYTHING (the little wine rack and the
pillows counted, don’t think I didn’t see you), so we did the heavy lifting
(treadmill, elliptical and that bookcase made from solid stone). The bookcase
wasn’t really made from stone, but it might as well have been. Pat and I agree
that it will never be coming upstairs… 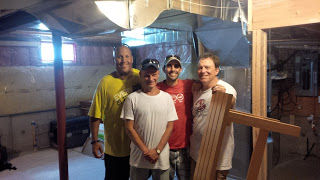 From 9:30a until 5:30p we slugged furniture (Big K furniture
is friggin heavy) upstairs and down and filled the 5 ton truck 3 times. It was
quite the day baking in the heat and doing some serious lifting (funny how
Deadlifts help you when moving time rolls around). We did our best to stay
hydrated and we received a much appreciated pizza lunch. Not paleo? Guess what,
today, I DON’T GIVE A ____ (insert the four letter swear word of your choice).
Hydration was foremost on everyone’s mind, but I’m still a
bit worried.  Is it normal to drink 6+ liters
of water and only pee once? Hey, it wasn’t for lack of trying to get water in,
but I was a hot sweaty mess for most of the day. I felt pretty good and really
strong.  I had planned on heading to the
box for the normal class with the #530Crew, but by about 1p I knew that there
was zero chance that I could WOD. Even as I lay here in the AC comfort of the
Command Centre, I feel every muscle in my body tightening up.  Tomorrow will be a struggle.
The best part of the day though was getting a chance to see
@phillyk007. I haven’t seen him in a month and though he weighs a lot less than
the last time, I was very happy to see him up and moving. I know that he has a
long road to get back where he was, but he won’t stop and I have no doubt he
will be back better than ever (I hear CrossFit is a great way to get strong,
just saying). Take it easy as you find a place for everything and we’ll see you
again soon (mainly because said treadmill and elliptical will eventually have
to move to the basement).
Beez